Ten believers from Jiangxi Province, arrested last year, were sentenced to prison from 3.5 to 11 years. They did nothing wrong except practiced their faith. 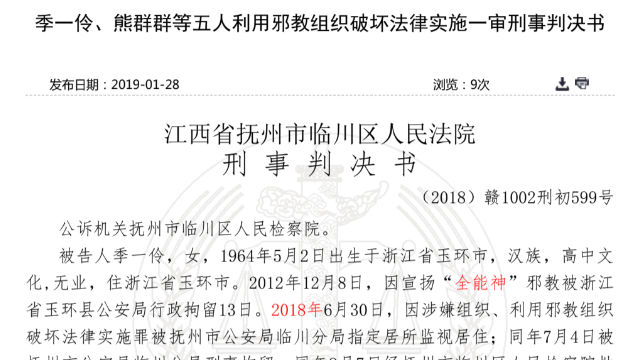 The Church of Almighty God (CAG) is the largest Chinese Christian new religious movement and one of the most persecuted religious groups in China. The CCP included it on the list of the xie jiao in 1995, and punishes CAG believers according to Article 300 of the Criminal Code, which stipulates that those who “use a xie jiao,” i.e., are active in it in any capacity, are punishable to a prison term of three to seven years or more.

In the case of some CAG members, the “more” may actually even mean 13 or 15 years.

Yang Meiyun, from Yichun city in the southeastern province of Jiangxi, was arrested for being a member of the CAG in 2017, at the Quzhou city railway station in Zhejiang, a province on the East China Sea. The People’s Court of Quzhou sentenced Yang Meiyun to 11 years in prison for “using a xie jiao organization to undermine law enforcement,” and she was sent to the No. 2 Women’s Prison in Zhejiang on June 20.

Another CAG member, Liu Meiling, was sentenced in June to six years in prison and fined 10,000 RMB (around $ 1,400) by the People’s Court of Yongxiu County under the jurisdiction of Jiangxi’s Jiujiang city. The woman was arrested in June last year for her role as the custodian of the Church’s books. All of more than 4,000 CAG books stored at her home were confiscated.

Wang Jiezhi and Xu Yanping from Poyang, a county administered by Jiangxi provincial government, were responsible for distributing books to the CAG members in the local area. Both were arrested last year – Ms. Xu in June and Ms. Wang in September. According to sources close to Xu Yanping, before the court verdict, the police tried to force her into signing three statements renouncing her faith – a repentance statement, a statement of guarantee, and a break-up statement – but she refused.

Yuan Maomao, another believer from Jiujiang, was sentenced to five years in prison and fined 20,000 RMB (around $ 2,800).

On December 22, 2018, the People’s Court of Linchuan District in Jiangxi’s Fuzhou city sentenced five CAG members (four from Jiangxi and one from Zhejiang) to prison for “using a xie jiao organization to undermine law enforcement”: Ji Yiling and Xiong Qunqun were sentenced to seven and a half years; Huang Yamei and Wu Youjin to seven years; and Wan Lingxia to three and a half years.

All five were arrested in June; the longest sentences were given to church leaders and co-workers. When Huang Yamei was arrested, 30,000 RMB (around $ 4,230) of her personal assets and 61,000 RMB (around $ 8,590) of church assets were confiscated.

According to informed sources, before the verdict was announced, the five believers were promised to be released as long as they signed statements of repentance renouncing their faith and provided information about the Church; but all five refused.

According to the 2018 Annual Report on the Chinese Communist Government’s Persecution of The Church of Almighty God – reviewed by Bitter Winter -, at least 11,000 CAG members were arrested across China last year. Out of at least 574 detained in Jiangxi, 23 received prison sentences.

The persecutions against the CAG continue in 2019. As an example, at least 560 believers have already been arrested in the eastern province of Shandong, and over 300 in Henan, a province in central China.