Another 13 countries, including Iran, signed the letter supporting the CCP’s horrific treatment of Uyghurs and other Muslims in Xinjiang.

China continues its efforts at recruiting fellow travelers into its Axis of Shame of countries prepared to sign letters defending the indefensible and claiming that Xinjiang is a heaven of human rights. According to these letters, the dreaded transformation through education camps, where thousands are tortured, killed, or led to commit suicide are in fact “vocational schools.”

The original Axis of Shame, a label Bitter Winter is proud both to have created and to see increasingly used by others, included 37 countries. The CCP has now announced that 13 more have signed, mentioning Iran, Iraq, Sri Lanka, Djibouti, and Palestine. Indeed, that Iran, another egregious violator of religious liberty, was missing among the original 37, was somewhat surprising.

Most countries sign, but realize that what they are doing is not honorable. They are ashamed to be part of the Axis of Shame. They ask the CCP not to make their names public.

Others, among the original signatories, support the CCP with statements and interviews. Some belong to the category of involuntary humor. An “expert” working for Saudi Arabia claimed that, before the enlightened activities of the CCP happily opened their minds, Muslims in Xinjiang were “close-minded.” Perhaps nobody informed the Saudis that the CCP uses “de-saudization” as a synonym of “de-radicalization,” claiming that the resurgence of Muslim pride in China is due to the evil influence of Saudi Arabia. Or can we expect that CCP experts will be invited to Saudi Arabia to “open the mind” of local Muslims?

More involuntary comic relief was offered by statements from the Venezuelan and Cuban embassies in Beijing. The Cubans said that their government is opposed to any efforts aimed at “regime changes” in China and elsewhere. One may vaguely suspect that by “elsewhere” they mean Cuba.

Venezuela stated that “China’s leadership in human rights is indisputable.” This is literally true in Venezuela. Those who would “dispute” that all is well in China, a staunch ally of the Maduro regime—or in Venezuela, for that matter—would go to jail.

What the CCP believes it can achieve by putting together such a shameful circus of human rights violators is unclear. Perhaps, once again, these news are mostly used for domestic consumption in China.

Update July 30: Some media have now published a list, which seems authentic, of the 50 countries part of the Axis of Shame. One European country, Serbia, has unfortunately joined it. 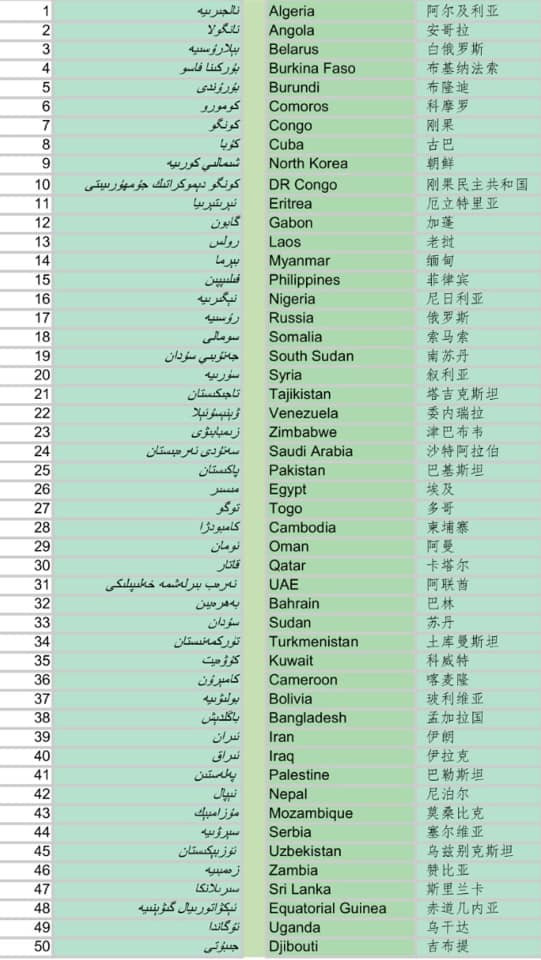 Update August 21, 2019: On August 20, Qatar withdrew its signature from the pro-CCP letter. See Qatar Withdraws from Axis of Shame.