A machine, coldly and mercilessly advancing at a slow and regular pace to kill, one after another, hundreds of chickens, whose remains are left on the ground after bloody harvesting. Due to a technical error, the first seconds of the footage of a wrong video aired at the beginning of the main session on religious persecution in China on the first of the three days of the scholarly conference, Re-Enchanting the World: Spiritualities and Religions in the Third Millennium, organized by the Center for Studies on New Religions (CESNUR) in the Luigi Einaudi campus of the University of Turin.

But chance doesn’t exist, and so the wrong video told a true story: a sad and graphically shocking realistic metaphor of what is happening to religious groups and ethnic minorities in the today’s People’s Republic of China.

This reality was recounted immediately after the right video has been shown – Bitter Winter‘s highly successful documentary Tiananmen and Religious Persecution in China, astonishing people in the audience, no matter how many times, possibly more than once, some of them had already seen it.

The CESNUR conference session was chaired by Prof. Holly Folk, Associate Professor at the Liberal Studies Department of the Western Washington University in Bellingham, Washington, one of the most renowned world authorities on The Church of Almighty God (CAG). Introducing the topic, Ms. Folk pointed out that the early history of the CAG is not easy to establish. First, because of the systematic and widespread distortion of truth through fake news that the CCP has been fabricating and selling since the beginning of the movement. And secondly, because of harsh interrogations, often involving torture, that CAG believers have faced in China, and the testimonies that they gave under much pressure, often trying to save their lives, became a complex and confusing matter.

Prof. Massimo Introvigne, co-founder and Executive Director of CESNUR, the author or editor of more than 70 books – among which are Alla scoperta della Chiesa di Dio Onnipotente. Il movimento religioso più perseguitato in Cina (Turin: Elledici 2019), a study of the CAG, a full and updated edition is forthcoming in English, and Il libro nero della persecuzione religiosa in Cina (Sugarco: Milan 2019), born out of the virtual pages of Bitter Winter and already reviewed by it– as well as the Editor-in-Chief of Bitter Winter, took the floor. He addressed the CAG’s internal narrative of the movement’s origin, underlining how important, for scholarly purposes, is to take into account always internal narratives of their origins given by religious groups and movements.

After summarizing the timeline of the CAG since its beginning in 1991 to date, and giving a brief but exhaustive overview of the CAG’s theology (with an important reference to its appreciation of beauty and the artistic impulse that springs out of it), Mr. Introvigne stressed that the CAG had suffered persecution since its beginning, when many of its early leaders were captured and killed right away.

Recalling (especially to the Italian audience) that CAG exiles in Italy are the largest CAG community in the diaspora, possibly equal only to the community in South Korea, the Italian scholar also relied on the interviews he conducted himself with CAG members to highlight the trials that Almighty God wants his people to go through in order to “remake” them into new, fully redeemed human beings, living in His forthcoming Age of Millennial Kingdom. There are six trials in total during the trial work Almighty God did in the early stage, and the last one of them saw the definitive spiritual defeat of the Red Dragon, a realistic symbol taken from the Bible. The CAG believes that the CCP resonates powerfully with the Red Dragon described in the Book of Revelation for its frenzied opposition against God, brutal persecution of Christians, and attempts to deceive and corrupt people with atheism, materialism and other fallacies. All this has developed the human nature of arrogance, slyness, selfishness, evilness, greed, etc. and resulted in increasing dehumanization. In CAG’s view, believers cannot be purified unless they forsake the poisons of the Red Dragon and put truths into practice.

Mr. Introvigne addressed a particularly important matter – the famous McDonald’s Murder of 2014, showing the footage of the real perpetrators’ trial and demonstrating that they have nothing to do at all, and never had, with the CAG, first and above all because, they admit that the CAG, in their opinion, worships the false Almighty God.

Prof. J. Gordon Melton, Distinguished Professor of American Religious History with the Institute for Studies of Religion at Baylor University in Waco, Texas, and one of the leading world experts on new religious movements, with a special interest in China, delivered the second paper of the session.

Mr. Melton explained that the 1982 Chinese Constitution formally protects religious liberty in the country, but it is understood only as pertaining to “normal” religious activity, the CCP-run Chinese state deciding what is “normal.” This constrains religions to very limited and narrow space in the public domain. The case of the Three-Self Church explains the situation well.

Founded by the communist state, and designed to infiltrate and control Protestant churches, the Three-Self movement has been, step by step, pushed to consider religion just as a private matter, molding the ultimate CCP strategy and goal for religions: tolerate them until they “naturally” (CCP’s language) become extinct, helping and accelerating the process. In fact, the CCP has published guidelines of religious behavior for the Three-Self movement to tame and temper the free public exercise of religion.

The so-called “Document 19” was released in 1982 to deal with house churches, i.e., Protestant communities who refuse to join the state-controlled Three-Self Church. The CCP policy is to get rid of them totally, but also to be patient while this process takes place. One could easily imagine that this is only due to the fact that, however powerful and unscrupulous the CCP is, the CCP does not (yet) have the real power to wipe out totally the large, widespread, and scattered reality of house churches.

Out of this story of CCP’s repression and strategy for the Chinese Protestant world, Mr. Melton continued, two more important questions emerge: the criminalization of other religious groups, depicted as crowds that simply operate under the facade of religion without being truly religious (again, it’s the CCP’s language) and the persecution of the Shouters as one of them.

All this was brought to formal perfection in 1995-1997 when criminalized groups were labeled xie jiao, which really means “heterodox teachings” (and used by the Chinese political power to outlaw any unwelcome groups for whatever reason), but wrongly and ideologically understood as “cults.” 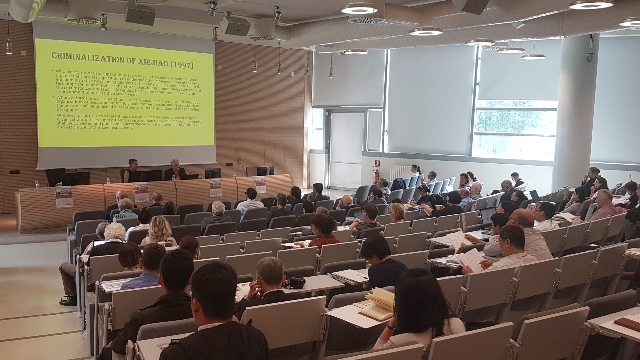 Well, Mr. Melton recalled that, after Falun Gong clashed with the regime in 1999, the group on that list considered by the CCP as most dangerous was the CAG, and the third the Shouters. What this means is that once the CCP has succeeded in destroying the first on the list, i.e., Falun Gong, it is the turn for the second, i.e., the CAG. Today, Falun Gong has been decimated and almost brought to extinction: this is why the repression against the CAG is increasing and deepening in all its cruelty.

At the end of the day, one crucial evidence can be gathered from sessions like this during a scholarly conference attended by a large audience: it is impossible to sever the academic study of religion from the denunciation of religious liberty trespassings. It is vital to keep the two things distinct but not separate, and this is highly telling in today’s world. The same point was raised on Wednesday, September 4, on the eve of the CESNUR conference, during the religious freedom Roundtable attended by many representatives of different religions.

Very welcome during the session on China were the greetings by Sen. Lucio Malan, himself a Waldensian, who found the time to join the conference, leaving for a while the crucial work that Italian politicians are involved in, in the wake of the formation of the new Italian government. Mr. Malan has been the staunchest defender of religious liberty in the Italian Senate for decades, and to Bitter Winter he says that, even if it is not possible to cut all ties with them, countries where no religious liberty is respected should be treated differently in international relationships by countries where religious liberty is a positive reality. For example, not letting those repressive and illiberal countries receive donations and charitable funds, or financial aid of any kind. 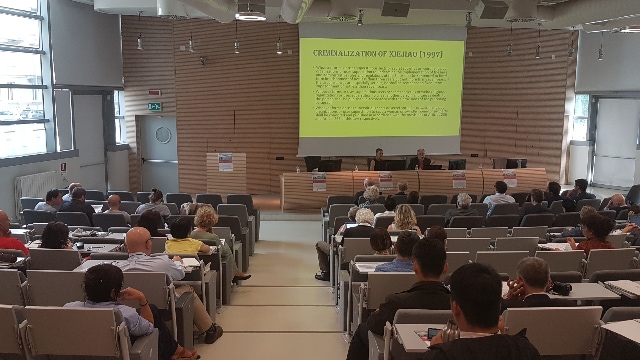