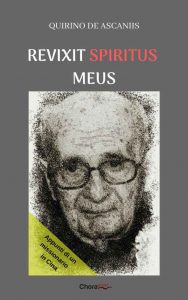 The long-awaited memories of Father Quirino De Ascaniis, a Catholic missionary to China who died in 2009 at age 100, warns against claims by CCP that Chinese enjoys “religious liberty” and offers new insights on the persecution of Catholics in China.

Father Quirino De Ascaniis (1908-2009) was an Italian Catholic missionary who, at age 100, was still active in Hong Kong. He was celebrated by the Vatican as the oldest active missionary in the world. His long-awaited memories have now been published in Italian by the Hong Kong Catholic publishing house Chorabooks with the title Revixit Spiritus Meus (in Latin: “My Spirit Revived”). The manuscript left by Father De Ascaniis has been edited by Father Sergio Ticozzi, a fellow member of The Pontifical Institute for Foreign Missions (PIME), and published with a foreword by musician and journalist Aurelio Porfiri.

Father De Ascaniis, who was arrested twice in China and finally expelled to Hong Kong in 1951, left a vibrant testimony about Chinese life during the civil war and under the Communist regime. His style is light and at times humorous, which shows how through faith and prayer he was able to maintain his calm and peace even in the most difficult circumstances.

From an historical point of view, the most important pages of the book are those where Father Quirino tells how the Chinese Communist Party (CCP) attracted naïve Catholics through promises of social justice and peace with religious freedom for all, which obviously were never kept. Shortly before dying in 2009, the missionary noted that CCP was still playing the same game. He believed that there will never be genuine religious liberty in China, as long as the CCP remains in power.

Among many other interesting details, the book offers evidence that Father Emilio Teruzzi (1887-1942), another Catholic priest from the PIME, was indeed assassinated by the CCP in Hong Kong in November 1942. Father De Ascaniis devotes a long chapter to refuting the CCP propaganda that, to this very day, insists that Father Teruzzi was assassinated by nationalist militias together with local bandits. He claims to be the best-informed person about the events leading to the death of Father Teruzzi, and that he was assassinated by CCP not because he was Italian, and Italy was at that time governed by the Fascist regime, but because he was a sincere believer in God and a missionary.