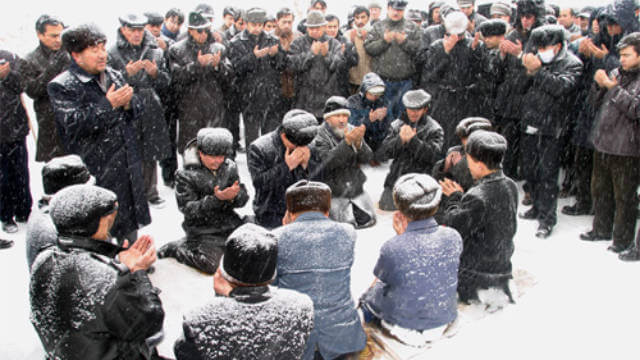 Government officials are monitoring funeral services in Xinjiang and prohibiting Muslims from commemorating their dead according to their faith and customs.

In an effort to take even more control of religion from believers, the Chinese Communist Party (CCP) is now meddling in how the religious conduct their funerals in Xinjiang Uyghur Autonomous Region.

Take, for instance, the funeral for a local elderly Hui man named Ma Ming on July 25, 2018. In addition to his funeral procession, there was a procession of SWAT and police cars for the service that was held in Hongxing town under the jurisdiction of Wusu city. But the government was monitoring the funeral for a specific reason: Ma Ming’s son and grandson were both seized earlier in March by police for taking pictures of a mosque that was going to be demolished. As if arresting them wasn’t bad enough, the police refused to let those conducting the funeral follow Hui funeral protocols, which require that before a body is buried, an imam must recite the Koran for the deceased and the rites of bathing the deceased with clear water and enshrouding the dead person with a plain white cloth.

The authorities then forbade the reciting of the Koran and only allowed simple wrappings being applied to the body – before insisting that the coffin be placed in a police-appointed vehicle instead of a hearse.

On the first day of the funeral, four to five SWAT police vehicles were parked outside of Ma Ming’s home, where police officers toting guns escorted his son; his grandson was not allowed to return home to wish his grandfather farewell.

“Before Ma Ming’s son was arrested, he was tall and sturdy, now, after just four short months, he’s become emaciated, and all that’s left of him is skin and bones,” one neighbor who is well-acquainted with Ma’s family said.

In February 2018, Ezimet, an Uyghur CCP member from Kashgar city in Xinjiang, was seized by six to seven armed police officers for performing salah – a prayer – in according with Islamic customs, at the burial ceremony of his mother several years ago. He remains in custody and an undisclosed location.

Ezimet’s wife and child were implicated as well and are being forced to report to the community’s neighborhood committee to study government policy.

“You cannot hold religious beliefs, and you can only say good things about the Communist Party, nothing bad,” the local police station and township government warned Ezimet’s wife and son.

Over in Changji city is Aydana, a Kazahk Muslim, whose 70-year-old mother passed away in December 2017; her funeral was strictly monitored by community workers.

“We don’t dare speak out, even for something trivial. The police might start making arrests,” Aydana said. “My nephew was taken away by police not long ago. All the police said was that it had something to do with a cellphone and they wouldn’t let us ask any more questions. They wouldn’t let us tell anyone about it either, and to date, we don’t know where he is being held.”

Local Xinjiang Muslims say that authorities have been arresting imams in droves and as a result, in some areas, Muslims are unable to get imams to recite the Koran for funerals, and even if they can get one, they have to be extremely careful so that they aren’t arrested for doing so. A Hui woman from southern Xinjiang told Bitter Winter that her family had to secretly have an imam come to their home in the middle of the night to recite the Koran for her deceased father-in-law.

(All names in the text are pseudonyms.)