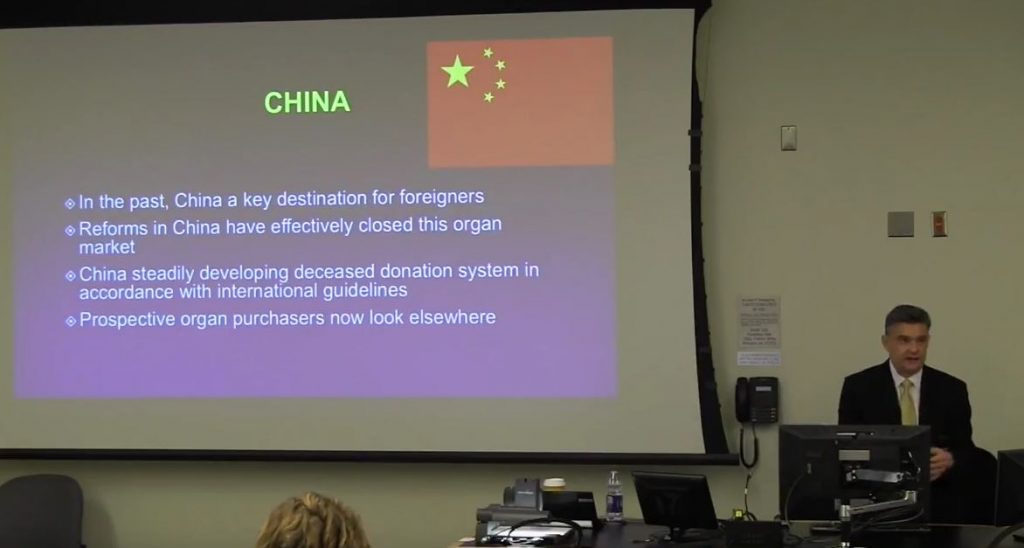 A Griffith University lecturer, accused of being “in China’s pocket” for his attempts to deny that organs of Falun Gong prisoners of conscience are “harvested,” is being investigated and banned from traveling abroad. He denies all charges.

Australian media report that Dr Campbell Fraser, a senior lecturer in the Department of Business and Asian Studies at Griffith University, is under investigation and has been “banned by Griffith University from travelling abroad or talking to the media.” The investigation is about his support of the international campaign by the Chinese authorities trying to claim that the infamous practice of “organ harvesting,” i.e. of taking organs for the transplant market from Falun Gong prisoners of conscience, either never happened or has been stopped.

Fraser is obviously not an expert of organ transplants, his field being business and Asian studies. During the ongoing Australian parliamentary Inquiry into Human Organ Trafficking and Organ Transplant Tourism, a Falun Gong representative observed that Fraser, who also testified in the inquiry, had “seemingly become an expert on organ trafficking, attending conferences in Rome, Wuhan, Hong Kong and Kunming over the past two years”, and that “he is also unique in that he is extensively quoted in Chinese media with very pro-China organ transplant statements and anti-Falun Gong statements.”

Accused of being “in China’s pocket” by his opponents, and criticized by Australian scholars of medical ethics, Fraser noted that he has been cleared in two precedent investigations and denied being a hired gun for the Chinese Communist Party (CCP), while admitting that China “paid for travel and accommodations” when he visited there.

Griffith University told The Australian that, “We support the right of our academics to talk publicly on their area of expertise. Falun Gong is outside of Dr Fraser’s area of academic expertise. The university would not support any commentary from an academic that is unsubstantiated or potentially defamatory to another organization or individual”.

The matter is a potential embarrassment for the Vatican as well, as Fraser was among those invited to the Pontifical Academy of Sciences 2017 Summit on Organ Trafficking and Transplant Tourism. Fraser was interviewed on his participation to the Summit by CCP’s China Daily and, besides reiterating his negationist position on organ harvesting, stated that Falun Gong “met [sic] the criteria of a cult because they believe in one person with supernatural powers.” When Dr Fraser became an expert on “cults,” in addition to transplants and medical ethics, was not explained.

Bitter Winter does not take any position on Dr Fraser’s specific case, waiting for the outcome of the investigation, and has no reason to doubt his professional integrity, but notes that it keeps receiving disturbing reports about a CCP shopping campaign for academics willing to support its positions against Falun Gong and other banned movements against a (generous) fee.