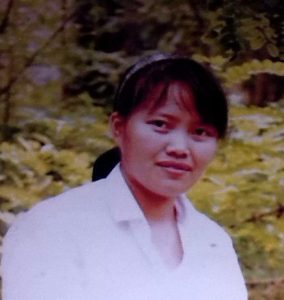 On December 21, 2012, a 44-year old woman from The Church of Almighty God named He Chengrong was secretly arrested by the CCP police for being a leader of her Church and died while in custody. She had joined the Church at the end of 2004.

Wiretapped, arrested and tortured to death

On December 21, 2012 at about 1 p.m., He Chengrong was tracked and located by the police by her phone calls. She was arrested on her way to the church and taken to the National Security Brigade of Aksu Public Security Bureau. The police confiscated 700 RMB of cash (about 90 EUR), some gospel materials and all the personal belongings.

After her arrest, her husband tried “to buy her back” from the police officers. The amount was fixed at more than 30,000 RMB (about 3900 EUR) and the police agreed to release her four or five days later.

On January 9, 2013 at about 12 p.m., three policemen from the National Security Brigade of Aksu Public Security Bureau unexpectedly visited He Chengrong’s family. They informed them that she had been urgently sent to the First Agricultural Division People’s Hospital in Aksu due to myocardial infarction on the evening of January 8, and that she had died after a failed attempt to save her. They questioned the police, with controlled indignation but deep pain, “Why not inform us when she was under emergency medical care?” but the police fooled them with the excuse of “not having enough time.”

He Chengrong’s family had access to the remains of the deceased on the next day of the police visit. They were shocked by her dreadful appearance. Her body was covered with a mass of bruises, including a black and blue bruise of about 2cm in width behind her ears, and finger-wide vertical marks on both sides of her neck. There were bruising scratches all over her back and her arms. It was hard to find a piece of skin as wide as a hand palm in normal color. The lower part of her body was so swollen that her legs looked like two loaves of bread, twice their usual thickness. Pressed by questions from the family about obvious signs of torture, the police just answered it was nothing but the livor mortis.

Witnesses testify: He Chengrong was tortured to death

A female Christian who was detained next door to He Chengrong’s cell told the family, under cover of anonymity, that she was beaten to a dead faint by the police officers and then awakened with cold water. On the night when He Chengrong died, the witness heard He Chengrong groaning loudly in agony all night long. She was obviously suffering great pain and trying to shout out but was unable to. Early next morning, she heard someone in He Chengrong’s cell shouting, “She won’t pull through! She’s dying!”

Another female prisoner surnamed Wang (45), who was a former bank clerk, was sharing the cell with He Chengrong and also testified to the family. Wang explained that the police from the National Security Brigade punched, kicked and slapped He Chengrong to extort some information about The Church of Almighty God and its members. They kept her from sleeping day and night, and forcibly fed her with chili water. After each interrogation session, she was carried back to her cell on a stretcher.

During her last interrogation, He Chengrong was again forced to swallow chili water, which resulted in stomach pain and irritation of the bowels. She could not swallow anything else. Ms. Yue’er Nisha, a Uyghur guard in the detention center, asserted that it was a deliberate fast… (!) but she shackled He Chengrong’s feet to prevent her from going to the toilet. Moreover, she ordered other male prisoners to tie her onto a wide bed and forcibly insert a tube into her esophagus to feed her with hot food.

On January 7 at about 8 p.m. that same night, He Chengrong was incontinent, developed a very high fever, and remained unconscious at the edge of death. Though the guard received several reports about He’s desperate situation, she turned a deaf ear to it, saying that He was pretending to be sick. He Chengrong was not sent to the hospital until January 8 before dawn, and died after a failed rescue attempt.

At about 6 p.m. that very evening, the Xinjiang police sent a forensic scientist to the mortuary. Without the consent of the family, he opened He Chengrong’s skullcap to remove her brain and opened her abdomen to took parts of her heart, lungs, stomach, liver and the bowels to allegedly examine the cause of the death.

According to He Chengrong’s brother-in-law, that autopsy was really an unbearable scene. Zhao Youpeng, the 54-year-old male vice director of Aksu Public Security Bureau, together with the Secretary of the same public security bureau, vice director of the Nancheng Police Station, vice director of National Security Brigade, attended the scene.

The police did not allow He Chengrong’s family to see her remains again.

Police trying to shy away from their responsibility

Zhao Youpeng, vice director of Aksu Public Security Bureau, oversaw the aftermath of He Chengrong’s death. He gathered He Chengrong’s family with the forensic scientist and some people from the Aksu Court, Aksu Procuratorate and National Security Brigade.

Zhao Youpeng told He Chengrong’s family that her beliefs in The Church of Almighty God were against the doctrine of the Communist Party and society. According to him, she was a political criminal because her beliefs were associated with politics. He also asserted that the police were not responsible for the death of He Chengrong because she died of myocardial infarction.

He Chengrong’s family stated that she never ever had any heart disease or myocardial infarction before, only stomach disease, and they demanded justice for her.

The police took the tough stance of denying any relationship with He Chengrong’s death and tried to downplay the gravity of the lethal incident. They took her husband to the police station and Zhao Youpeng threatened him, saying, “Wasn’t it just the death of a political criminal? Be smart! It is Xinjiang here!” Then Zhao tried to force He Chengrong’s husband to sign a laboratory test report which stated that she died of pulmonary infarction but he refused.

On February 5, 2013, the Aksu police had He Chengrong’s remains forcibly cremated at Xidaqiao Crematorium. All evidence has now vanished in smoke and ashes.

The Constitution of the People’s Republic of China provides protection for everyone’s basic rights and freedom.

Article 37: ‘The freedom of person of citizens of the People’s Republic of China is inviolable.  No citizen may be arrested except with the approval or by decision of a people’s procuratorate or by decision of a people’s court, and arrests must be made by a public security organ. Unlawful deprivation or restriction of citizens’ freedom of person by detention or other means is prohibited; and unlawful search of the person of citizens is prohibited.’

Article 38: ‘The personal dignity of citizens of the People’s Republic of China is inviolable. Insult, libel, false charge or frame-up directed against citizens by any means is prohibited.’

Article 247: ‘Any judicial officer who extorts confession from a criminal suspect or defendant by torture or extorts testimony from a witness by violence shall be sentenced to fixed-term imprisonment of not more than three years or criminal detention. If he causes injury, disability or death to the victim, he shall be convicted and given a heavier punishment in accordance with the provisions of Article 234 or 232 of this Law.’

Article 248: ‘Any policeman or other officer of an institution of confinement like a prison, a detention house or a custody house who beats a prisoner or maltreats him by subjecting him to corporal punishment, if the circumstances are serious, shall be sentenced to fixed-term imprisonment of not more than three years or criminal detention; if the circumstances are especially serious, he shall be sentenced to fixed-term imprisonment of not less than three years but not more than 10 years. If he causes injury, disability or death to the victim, he shall be convicted and given a heavier punishment in accordance with the provisions of Article 234 or 232 of this Law.’

Article 50: ‘Judges, procurators and investigators must, in accordance with the legally prescribed process, collect various kinds of evidence that can prove the criminal suspect’s or defendant’s guilt or innocence and the gravity of his crime. It shall be strictly forbidden to extort confessions by torture and to collect evidence by threat, enticement, deceit or other unlawful means. Conditions must be guaranteed for all citizens who are involved in a case or who have information about the circumstances of a case to objectively and fully furnish evidence and except in special circumstances they may be brought in to help the investigation.

Police Law, Judges Law, Public Procurators Law, State Security Law and Prison Law have special provisions regarding the prohibition of torture so as to safeguard the human rights of all citizens. As for instance the Police Law states in its Article 22 (4) that: ‘People’s policemen may not commit any of the following acts: to extort confession by torture or subject criminals to corporal punishment or maltreat them.’