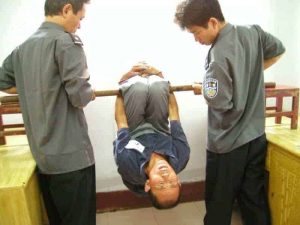 In the morning of November 26, 2017, He Linbo was arrested at the Shihezi City Train Station in the Xinjiang Uyghur Autonomous Region, China. He was accused of being a leader of a banned religious organization. He was escorted to the police post of the train station, where he was physically searched and beaten.

At noon on the same day, he was confined in the Shihezi City Detention Center. In the prison room, the head prisoner, i.e. a prisoner appointed by the jail to oversee the others, ordered him to mop the floor and toilet. The head prisoner forced him to strip naked and squat in the toilet, and ordered him to put both hands on his head. He then poured basin after basin of cold water down his head. It was the coldest days of the winter. He was shivering from the cold while suffering from a terrible headache. The head prisoner asked him to shout that the water was in fact not cold, and stopped pouring it only after He complied.

On November 27, He was escorted to the Guangming Road Police Station in Wujiaqu City for interrogation. During the interrogation, the police handcuffed him to a tiger bench and prevented him from sleeping for several days. He was guarded by four agents. The State Security Brigade captain took an electric wire, twisted it into a finger-sized cable, took turns with three people including the Criminal Police Squad captain, and whipped him on his back, chest and legs. He then continued whipping him with a thinner copper wire. Handcuffed to the tiger bench, He was unable to dodge and avoid the brutal beating. Later, the agents whipped him on his hands, removed his shoes and whipped the tops and bottoms of his feet. The pain made him scream out loudly. Both of his hands and feet were swollen.

Since he was not answering the questions, the captain delivered him over to four younger policemen, who took him down from the tiger bench and fed him mustard oil. They made him do half squats for twenty minutes each time, with a ten-minute break in between. This was repeated three times. His face was covered with sweat. His legs were trembling uncontrollably. Afterward, the police handcuffed him to the tiger bench again.

The next day, the police escorted him to the Sixth Agricultural Division Detention Center in Wujiaqu City. During a strip search in the detention center, he saw that his back was covered with wounds, his legs were bruised, and his feet were so swollen that he could not put on shoes. On December 11, he was transferred to a hotel room in Wujiaqu City for “secret interrogation,” as it often happens in China. Inside the hotel, the police handcuffed him to a tiger bench and deprived him of sleep for seven days and nights. As soon as he dozed off, the police opened the window to make him freeze, and used towels soaked with cold water to rub him on his head, face and neck. Wearing only a thin cotton T-shirt and a pair of pants, he was trembling all over from the coldness.

In the early hours of December 18, He escaped from the hotel while the guarding police were asleep. At the time of this writing, he is still at large.

The story of He Linbo is one of many documented with sworn affidavits and reported in documents submitted to the Human Rights Council of the United Nations in view of China’s Universal Periodic Review (UPR), due in November 2018. The Universal Periodic Review (UPR) is an examination of the human rights situation to which all member states of the United Nations should submit every five years. China’s 2018 UPR has been an opportunity for several NGOs to file submission and documents about the dire situation of religious liberty there. Proving that totalitarian regimes submit their dissidents to torture is notoriously difficult. Obviously, they do not give to their victims certificates confirming they have been tortured. However, in preparation of the UPR sworn affidavits and other documents have been patiently collected, and slowly a base of evidence that members of banned religions are victims of torture and extrajudicial killings in China is being built.

He Linbo is a member of The Church of Almighty God, one of the religious movements listed as xie jiao in China. Tables of the movements classified as xie jiao by the Chinese regime have been recently published in The Journal of CESNUR in an article by Hong Kong scholar Ed Irons. The article shows that the official list of xie jiao includes both non-Christian group and Christian house churches such as The Shouters, The Church of Almighty God and the Full Scope Church. “Xie jiao” is translated in Chinese official documents in English as “evil cults,” but the translation is wrong and aims at eliciting sympathy for the Chinese repression of these groups among Westerners hostile to “cults” in general. Xie jiao means “heterodox teachings” and has been used since the Ming dynasty to identify groups declared by the emperor to be dangerous for the social order and the government. Lists of xie jiao were always compiled on the basis of political as well as theological considerations. The modern emperor of China, the Chinese Communist Party (CCP), follows this old policy.

There is a special cruelty in the persecution of the xie jiao. Article 300 of the Chinese Criminal Code makes a crime of being active in a xie jiao, punishable with jail penalties from three to seven years “or more.” Their members are de-humanized to the point that torture, theoretically forbidden in China, is routinely used by the lower levels of the police and tolerated by the higher. Most accusations of crimes against the xie jiao, including The Church of Almighty God, are fake news fabricated in China and unfortunately sold to respectable Western media that repeat them without checking too accurately how reliable are their Chinese sources.

However, the groups listed as xie jiao are not the only targets of religious persecution in China. As sociologist Fenggang Yang noticed in 2006, the xie jiao are part of a “black market” of the religion in China, opposed to the “red market” that includes the only five religious organizations approved by the regime, i.e. the Buddhist, Taoist, and Muslim associations controlled by the government, and the Protestant Three Self and Catholic “Patriotic” churches, whose leaders are appointed by the CCP.

Between this “red market” and the “black market” of the xie jiao, there is the large area that Yang called “grey market,” including religious organizations such as the Catholic underground church loyal to Rome and many Protestant house churches. They are not regarded as xie jiao by the government. However, they are excluded from the legitimate “red market,” are labeled as illegal, and can be persecuted at any time. Indeed, the new law on religion that came into force on February 1, 2018 made life for these churches much more difficult.

As it happens for the religious organizations classified as xie jiao by the CCP, the situation of these “non-sinicized” churches and religions (the label does not indicate that their leaders are not Chinese, only that they have not been selected and appointed by the CCP) is often misreported because of the proficiency Chinese intelligence has acquired in spreading fake news.

This is precisely the reason why a group of scholars and religious liberty activists created Bitter Winter: to report objectively on the winter of religious liberty in China. Editorials and articles published every month, and news updates twice a week, will inform on China and contrast the fake news. Unfortunately, we do not believe that this would change the situation in China. But it may contribute to change how the situation of religion in China is perceived internationally, which is inter alia relevant when religion-based refugee claims are advanced by Chinese who escaped abroad. If our news from China would at least improve their situation, our effort will not be in vain.