Dissidents, the religious, anyone considered “dangerous” by the state, end up on its records and are harassed; even a seven-year-old child and a dying elderly man. 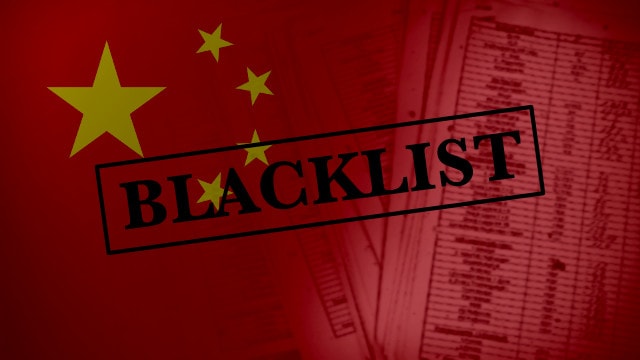 There is growing evidence that the CCP is extensively collecting information about the identities of pro-democracy demonstrators in Hong Kong, and that some of them have already been “blacklisted” by the state. Fear is spreading among activists that the regime is looking for an opportune moment to “settle scores” with them.

According to a report by Deutsche Welle on September 20, a website called HK Leaks published the personal information of nearly 100 pro-democracy protesters, journalists, and politicians in Hong Kong. “The site designates profiles to one of the three main categories, and shows their headshots, date of birth, telephone numbers, social media accounts, residential address and ‘nasty behaviors,’” states the article.

“Since the suspicious website came to light, several Chinese state-run media outlets have promoted the published information through their accounts on Weibo, a popular microblogging platform in China,” continues the article. “They encourage Chinese netizens to share information about the site widely, and call on all internet users in China to help force people on the list to ‘take off their masks and reveal their identities.’ While it remains unclear who leaked this information to HK Leaks, Sunny Chiu, a district councilor from Hong Kong’s Sha Tin district, wrote on his Facebook page that one of the victims told him that he believes his information was provided by the Chinese police.”

On September 18, China’s state-run newspaper People’s Daily published a commentary, stating that the Hong Kong government is promoting the so-called anti-mask law, asserting that protesters should “not be afraid of revealing their faces.” Pro-Beijing lawmakers in Hong Kong seem to share the view and claim that the ban on masks during protests should help end the disturbances in the city.

Quite unlikely. On the contrary, many in China, or any totalitarian state, know what it means to be identified as a “troublemaker” and blacklisted by the state: restricted travels, no work prospects; long-term surveillance and control. During important government meetings or anniversaries of significant events, such as the Tiananmen Square massacre, blacklisted persons are kept under strict control in the name of “maintaining social stability.” Their relatives and children also receive “special” treatment; for example, they will be unable to gain employment with government agencies or allowed to enlist in the military.

Under the current regime, it’s hard for the Chinese to know who, when, and for how long can be blacklisted. What are the requirements to be removed from a blacklist, or is there an age limit for being blacklisted? Perhaps the ordeals of some believers can help shed some light on it.

When the police raided a Shouters meeting venue in the southeastern province of Fujian in 1996, they found a list of the names of believers who had been baptized at the place. According to a government insider, 23 years later, in 2019, the authorities demanded to investigate everyone on the list again, including a child who was only seven years old at the time, now 30.

“It isn’t easy to get removed from the government’s blacklist. If the blacklisted people are found continuing attending religious gatherings, they will be arrested and are unlikely to be released ever again,” another government source revealed.

In June, a paralyzed man in his late eighties from the central province of Hubei was questioned by the police because of his arrest during a raid on a gathering of the Born Again Movement, of which he was a member. His advanced age saved him from prison then, but he remained blacklisted until his death two days after the officers came to question him in June.

A neighbor told Bitter Winter that the elderly man had not been able to take care of himself since last year, because he was very ill and bedridden. “Regardless, the CCP harassed him,” the neighbor was shocked, unable to comprehend the ruthlessness of the regime.

Permanently regarded as a “dangerous person”

Not long after the 2019 Spring Festival, the Chinese New Year, Ms. Yu from the north of China was dismissed from her job after the police threatened her employer to let her go or be implicated herself. The reason was that Ms. Yu participated in a gathering of The Church of Almighty God (CAG) 13 years ago and was placed on the government’s blacklist after someone tipped off the police.

Although she didn’t attend any religious activities after that, she was repeatedly investigated. The police even demanded Ms. Yu’s family members to take videos of her working and send the recording to them. Whenever she boards a high-speed rail train, the police often rummage through her bag and take photos of her train ticket and ID card. Not wanting to run into such inconvenience anymore, Ms. Yu prefers to stay in her local area.

In another case, a resident of Fushun city in the northeastern province of Liaoning practiced Falun Gong for a few days for the sake of her health 18 years ago. After learning that the CCP banned Falun Gong, the woman didn’t even consider practicing it anymore. Despite this, the police repeatedly questioned her about Falun Gong and forced her to sign a statement, confirming that she had withdrawn from the religious movement. And, surprise – the woman still remains on the government’s blacklist and is a target for investigations. The last time police came to question her at home was in May. During previous visits, policemen would search her home without any probable cause.

Clearly, in CCP’s view, anyone who has ever been accused of “misconduct” by the state will be permanently regarded as a “dangerous person” and be blacklisted.

Amid government’s increasing suppression efforts, anyone who walks the streets of Hong Kong, even children, have a good reason to wear face masks and conceal their identity. The testimonies of persecutions of dissidents and the religious on the mainland that Bitter Winter reports on daily gives the protestors in Hong Kong a serious incentive to do just that.