A new book helps understanding why the atheist Chinese Communist Party claims it has the right to decide which Buddhist lamas are authorized to reincarnate.

Within the borders of China, there are more than 1,000 citizens with a very special identity card. It certifies that they are reincarnations of deceased Buddhist lamas, each of whom had been duly authorized to reincarnate by the Chinese Communist Party (CCP). The same Communist Party certifies that each holder of the special card is the only genuine reincarnation of a certain lama. Competitors would be dealt with severely by the CCP police.

This bizarre practice has been going on since 1995 when the Dalai Lama recognized a six-year-old boy called Gedhun Choekyi Nyima as the reincarnation of the 10th Panchen Lama (1938–1989). The boy thus became the 11th Panchen Lama, the highest authority in the Geluk school of Tibetan Buddhism after the Dalai Lama, who is the school’s supreme leader, but was not recognized as such by the Chinese authorities. They took the child into custody (he has not been seen ever since, although both the Dalai Lama and the CCP claim he is alive), and organized their own search for the 11th Panchen Lama. The CCP, through Tibetan collaborators, came out with a list of candidates, not including Gedhun, and selected the new Panchen Lama by placing the names in something called the Golden Urn. They extracted the name of one of them, 5-year old Gyaincain Norbu, who was groomed to become the CCP-sponsored 11th Panchen Lama and one of the official voices for CCP-loyal Buddhism in China.

In 2007, the State Administration of Religious Affairs institutionalized the right of the CCP to decide which lamas should be authorized to reincarnate, to control the process for identifying the reincarnations, and to certify what reincarnations were genuine through its infamous Order no. 5. The regulation was widely criticized abroad, where the paradox of an atheist party asserting control of reincarnation was easily ridiculed. Yet, it remains a powerful tool through which the CCP controls Buddhism in Tibet and beyond.

In both Tibet and Mongolia, there are, in fact, thousands of lineages of reincarnated lamas. The Dalai Lama, the Panchen Lama, the Karmapa (the head of another large Tibetan Buddhist school, the Karma Kagyu), and the Jebtsundamba Khutuktu (the head of the Mongolian branch of the Geluk school, a position currently vacant) may be the most well-known internationally, but there are many others.

How a new reincarnation of a deceased high lama was, or should be, identified is a matter of contention. The question is now highly political, and history often becomes partisan. On September 24, 2011, the Dalai Lama published an often quoted official message where he explained that the candidate reincarnations were identified following the advice of the four major Tibetan oracles (mediums who channel divinities and speak in trance) of Lamo, Nechung, Gadong, and Samyé, signs appearing as miraculous, and visions appearing in sacred lakes such as Lhamo Latso, located south of Lhasa. The Dalai Lama also explained that it was possible, and in fact had happened historically, that the soul of a lama fragmented, causing multiple reincarnations of the same lama to be born, and also that it “emanated” a successor when the lama was still alive. The Dalai Lama reiterated these points in an interview published on Christmas Day, 2018.

But what happened whether two or more suitable candidates were identified? Theoretically, in Geluk theology all can be reincarnations of the same deceased lama, but in practice, each high office can be occupied by one person only. The Dalai Lama mentioned “divination employing the dough-ball method (zen tak) before a sacred image while calling upon the power of truth.” This method consists in encasing the answers in small balls of dough and rolling them about on a pan until the ball with the name of the selected candidate rolls off.

The Dalai Lama also discussed the Golden Urn, a method imposed in 1792 by the Qing Qianlong Emperor (1711–1799) through which the names of the candidates were introduced in an urn specially forged and a lottery system was used. The Dalai Lama claimed that “this system was imposed by the Manchus, but Tibetans had no faith in it because it lacked any spiritual quality. However, if it were to be used honestly, it seems that we could consider it as similar to the manner of divination employing the dough-ball method.” The Dalai Lama insisted it was used only twice for the Dalai Lama, for the 11th (1838–1856) and 12th (1857–1875)—but in fact once, as the 12th had already been clearly identified through the traditional methods—and twice for the Panchen Lama, for the 8th (1855–1882) and the 9th (1883–1937).

As mentioned, history is in itself political. CCP historians insist on the widespread use of the Golden Urn, and their Tibetan counterparts tend to downplay it. The 2011 message of the Dalai Lama was based on a reasonably accurate recognition of existing scholarship. However, new documents have emerged since. The official statement of the Qing Emperors was written in Chinese, although the famous edict by the Qianlong Emperor promulgating the Golden Urn system, the 1792 “Speech on the Lamas” (喇嘛说 / 喇嘛說), was set in stone at Beijing’s Yonghegong Temple in four languages, including Manchu. Historians trained at Harvard University have been particularly active in studying documents written in Manchu, which both is a different language from Chinese and was the Qing Dynasty’s mother tongue. 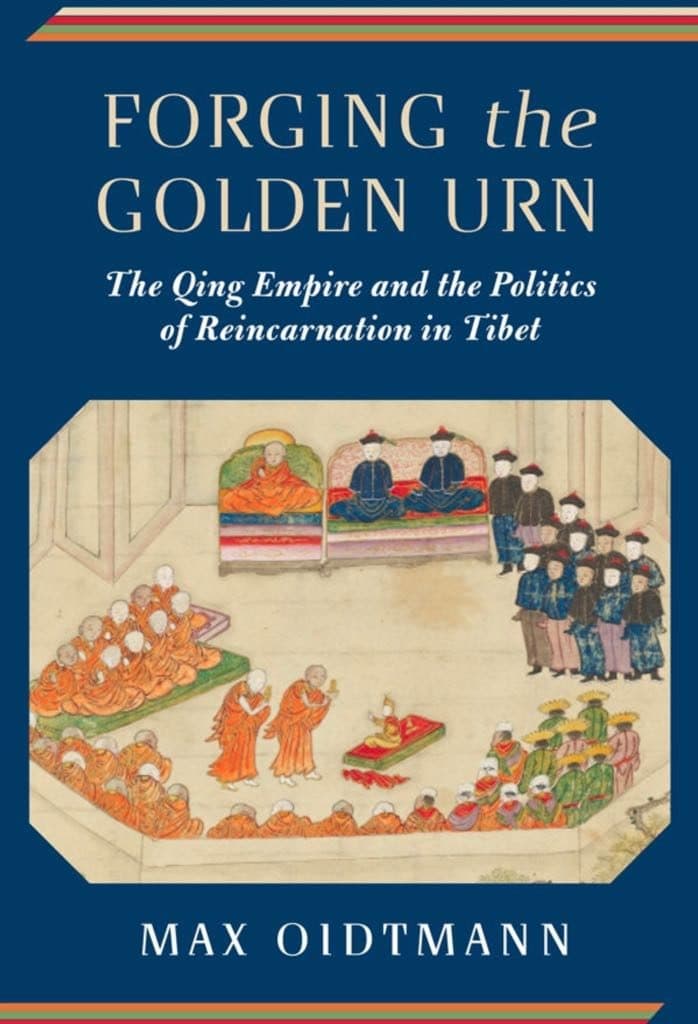 One such historian, Max Oidtmann, has now published Forging the Golden Urn: The Qing Empire and the Politics of Reincarnation in Tibet (New York: Columbia University Press, 2018), the most comprehensive examination of the Golden Urn question to-date. Oidtmann and the Dalai Lama agree that one main reason for the introduction of the Golden Urn was the attempt by the Gurkhas from Nepal to invade and conquer Tibet in 1791, and the subsequent intervention of Qing troops to protect Tibet and repeal the Nepalese. Oidtmann, however, by studying the secret correspondence in Manchu between the Qianlong Emperor and his chief advisors, comes to the conclusion that the Qing were not too much concerned with the Nepalese. Equally or more important for the introduction of the Golden Urn were matters about Mongolia, and the desire of the Qing to prevent the potentially rebellious Mongol aristocrats from imposing their children as reincarnations of the most prominent Mongolian lamas.

Above all, Oidtmann insists that, unlike the CCP, the Qianlong Emperor really believed in reincarnation. He was a pious Buddhist, who found many commendable elements in the Tibetan Geluk system. While the first secret reports in Manchu were favorable to the attitude of the high lamas during the war with the Nepalese, soon a different picture emerged, blaming the corruption of the lamas, and in particular of the major oracles, for the weakness of the Tibetan system when it was confronted with the Gurkhas’ invasion. Together with problems in Mongolia, these reports persuaded the Qianlong Emperor that Tibetan Buddhism had become corrupted by the systematic finding of the reincarnations of the deceased high lamas among the children of the same families. While he believed in reincarnation, the Qing Emperor was much more skeptical about the Tibetan oracles (not about mediums and oracles in general: he had his own), as authorities of dubious morality that operated independently from any political control. He ordered their suppression, and the introduction of the Golden Urn, a lottery system Ming Emperors had introduced successfully to stamp out corruption and nepotism in assigning their bureaucrats to specific provincial positions.

He succeeded partially, as the Golden Urn was used less often than Chinese historians now claim—although perhaps more than contemporary Tibetans believe, as Oidtmann’s data show that between 1793 and 1825 the Urn was used for roughly half the major reincarnation searches, and overall it was used 79 times for 52 different major lineages. But the names to be introduced in the Urn often kept being selected by the oracles, notwithstanding the Imperial hostility to them.

Oidtmann’s main point is that the CCP and some Tibetan or Western historians are both wrong in interpreting the Golden Urn as a tool of Chinese sovereignty or imperialism over Tibet. He believes they read too much the events of the 18th and the 19th century through the lenses of contemporary problems. In fact, both the Qing Emperors and a part of the Geluk elites shared the common goal of reinforcing the system of lama reincarnations and making it more believable, thus giving Tibetan Buddhism and Tibet more stability. Resistances against the Golden Urn by the Tibetans emerged in specific cases, when they believed they had already a clearly identified and strong candidate, and should in turn not be interpreted as manifestations of Tibetan nationalism.

The situation, however, changed in the 20th century. It was the Nationalist Chinese Republic that passed in 1936 a law on the reincarnation of lamas that the CCP would use in 2007 as its model for Order no. 5. And, by the 20th century, resistance to the Golden Urn had, in fact, become a statement of Tibetan independence from China.

The CCP was aware of the sensitivity of the problems of lama reincarnations since it came to power, but decided to act only after the death of the 10th Panchen Lama in 1989. The fact that Order no. 5 followed only in 2007 is interpreted by Oidtmann as evidence that internal discussions were taking place within the Party.

Oidtmann’s final questions is why the CCP continues to pick up its own reincarnations of deceased lamas, as it should by now be aware that they have very little credibility among the Tibetans, both in Tibet and in the diaspora. His answer is that “the target audience for performances of the modern Golden Urn lottery has been the majority Han population in China, not the Tibetans of the Tibetan Autonomous Region or neighboring autonomous areas.” The CCP-sponsored reincarnations, including its current Panchen Lama, may not be taken seriously by the Tibetans, but they have become fashionable and authoritative as alleged representatives of an old, genuine, and somewhat mysterious Buddhist tradition around Buddhist temples of different persuasions in China. And abroad, where they travel to present to naive Westerners a CCP-friendly “Tibetan” Buddhism. This is probably one of the reasons why the current 14th Dalai Lama is not simply dismissing as irrelevant the fact that the CCP would most probably pick up and proclaim as the elect of the Golden Urn its own choice for the role of 15th Dalai Lama, and is promoting a large consultation of Tibetan and Mongolian lamas and intellectuals on how he should act to counter this very probable maneuvers.