The CCP strictly prohibits minors from having contact with religion, churches becoming forbidden zone for children. Even during their breaks from school.

Attempting to eliminate any opportunities for minors to have contacts with religion, the CCP has prohibited any faith-related activities, information, and symbols from appearing on school campuses. The state controls their lives off-campus as well. Primary and secondary school students in China have their summer holidays between June and August, and religion-related summer camps and other activities for children are being suppressed one after another.

A school in the northern province of Hebei recently issued a notice prohibiting students from participating in religious activities, setting out strict regulations for student attendance in this regard. “For students who are absent for no reason, their teacher must promptly contact their parents and verify the reason for it,” the proclamation reads. During winter and summer holidays, schools send out letters to parents, reminding them to strengthen the supervision of their children and prevent them from going to religious venues for scripture study classes or other theological training.

Parents received and were required to sign a notice prohibiting students from participating in religious activities.

On July 15, the police raided a summer camp, organized by a Three-Self church meeting venue in Foshan city in the southern province of Guangdong. According to sources, more than 80 people participated in the camp. While the children were playing games, dozens of police officers suddenly surrounded the meeting venue. The younger children were so scared that they started crying inconsolably. The police registered information about every child, noting the schools they attend, and arrested the pastor and six co-workers, who were released later that day.

Video: While holding a summer camp, a Three-Self church meeting venue in Foshan city was raided by the police.


On July 6, four government officials stormed into the site of a religious summer camp that was organized by a church in Lushan city in the southeastern province of Jiangxi. The officials took photos of all 37 young people who attended the camp and ordered to disperse it.

“You have Chinese blood in your veins. Chinese people grew the food you eat. You mustn’t worship Westerners’ religions,” a police officer scolded the students.

One of the church’s believers commented that seeing officials forcibly dispersing people will psychologically scar the children for a long time.

Yaofeng Church, located in Fuzhou city in the southeastern province of Fujian, had initially scheduled to hold summer camp activities in August. However, officials came to warn them three times that children are under the government’s management and that the church must not intervene.

Christian-operated training institutions are not spared

The suppression also expands to educational institutions operated by Christians. The “Tree of Life” is a legally-operated educational training institute in Fujian’s Xiamen city, founded in 2016, that has over 100 students and offers classes in English, arts, and alike topics. Since its foundation, the affectionate teaching provided by the Christian teachers has earned unanimous praise and recognition from parents.

But in April, the Education Bureau of Xiamen city issued a warning to teachers and students’ parents at some local schools, saying that the “Tree of Life” has “unhealthy courses” and fire safety issues, urging parents to withdraw their children from the training institute. Some parents were even required to sign a statement guaranteeing that their children will not attend classes there. Others unenrolled their children from the courses out of concern that disobeying the government would jeopardize their children’s future. 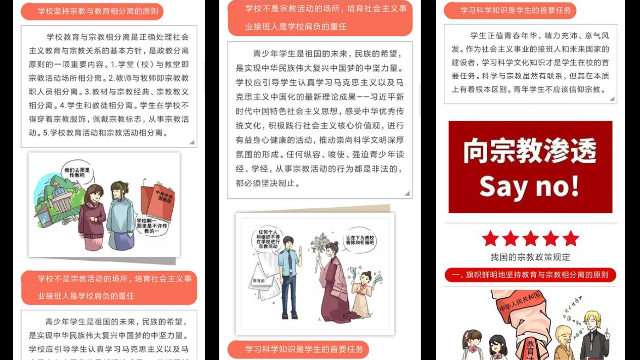 A government insider revealed that the main reason that the “Tree of Life” training institute was investigated was because of religion.

Some parents find the approach taken by the government to be incomprehensible. “The government’s practice of cracking down on a group of such caring people is really disgusting,” said one parent.

Three-Self church nearly shut down because of Children playing outside

On June 9, government officials from Shangqiu city in the central province of Henan unexpectedly stormed into a Three-Self church in the city’s Liangyuan district, claiming that they saw on surveillance video two children playing next to a stone block in front of the church’s entrance. As a result, the officials attempted to confiscate the church’s permit and prohibit them from holding gatherings anymore.

“In fact, the stone block is more than ten meters from the church’s entrance. Government officials said that it’s okay if the children passed by occasionally. But if believers brought them, the church would be sealed off. The CCP has the final word. People have to listen to it in every respect,” one of the congregation members complained.

After verifying the situation, government officials warned that if they discover believers bringing children to the church, the church building and all of the church’s finances will be confiscated.