Bitter Winter uncovered more information about the suicide of Song Yongsheng, the leader of the state-run Protestant Church in Henan’s Shangqiu city.

Song Yongsheng was the chairman of the Three-Self Patriotic Movement in Henan Province’s Shangqiu city and a member of the Standing Committee of the city’s Chinese People’s Political Consultative Conference (CPPCC) for four consecutive terms. Exhausted from the CCP’s control, he committed suicide on July 17, by jumping from the fifth floor of Shengtongxin Church, leaving behind a suicide note and a lot of confusion.

“I’m physically and mentally exhausted,” the pastor wrote in his suicide note. “I don’t have the mental or physical strength to coordinate and handle so many complicated things anymore. I’m willing to be the first martyr.”

More than a month has passed since his death. Apart from the suicide note and some sporadic information that was initially revealed, almost no further evidence has been made available, and media outlets in mainland China have kept silent about the matter.

Some church co-workers attempted to visit Song Yongsheng’s wife but discovered that they couldn’t get through when dialing her number. All communication methods for them to privately contact Christians abroad had also been cut off. In August, people that work for the church received a message from authorities on the WeChat messaging platform warning them not to post any information unfavorable to the country and the Party or touch upon any sensitive topics in their WeChat groups. Offenders were threatened with prison sentences ranging from one to eight years.

With the help of various sources and believers, Bitter Winter managed to find more information about Song Yongsheng’s suicide.

Song Yongsheng was born into a Christian family. His grandfather, parents, and wife are all Christians. He graduated from Nanjing Union Theological Seminary and had been giving sermons in Shangqiu city for 23 years.

Before his death, Song Yongsheng was responsible for the construction of Shengtongxin Church on Jianshe Road in Shangqiu and Shuang’ai Church in Caozhuang village. On August 24, 2018, the government forcibly removed the cross from Shengtongxin Church. After a week, the church was shut down, as officials claimed it to be “unlicensed.” Four months later, the CCP shut down Shuang’ai Church under the pretext that it was a “dilapidated building.”

The issue of the Shengtongxin Church’s permit exhausted the pastor mentally and physically. The church was built in 2012 at the cost of more than 10 million RMB (about $ 1,399,400) but had never received proper licensing. The government agreed to issue a permit but kept postponing it. After consultations, authorities gave verbal permission, allowing Shuang’ai Church congregation participate in the gatherings at Shengtongxin Church. “I don’t know how many trips Pastor Song made, but the government wouldn’t issue a permit. Pastor Song was often unable to sleep as a result of this matter,” a church co-worker explained.

According to reliable sources, the CCP has stopped approving religious venues for quite some time. Even the chairman of the Two Chinese Christian Councils was powerless in this matter.

“The removal of the cross from Shengtongxin Church became a source of anxiety for him, from which he was unable to recover for a very long time. When the cross was dismantled, he knelt and cried on the road to the south of the church,” the church co-worker added.

The handwritten phrases, added by Pastor Song to his suicide note on July 17, like “I’m too mentally tired” and “I really can’t run around anymore,” indicate that he may have visited several government departments to apply for a permit again on the morning of his suicide. 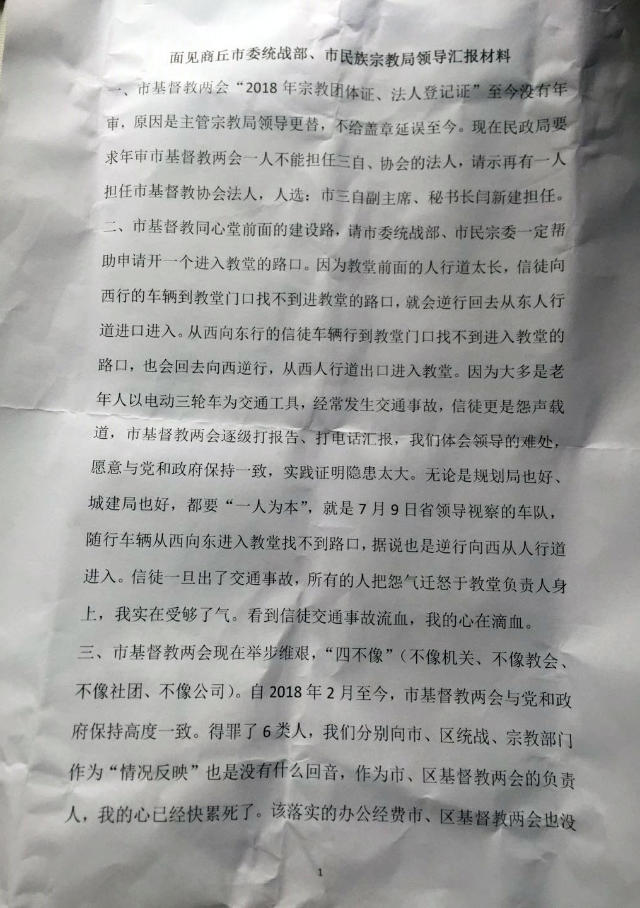 The suicide note also mentions inconveniences that believers face getting to Shengtongxin Church: there is no safe way to cross the street, so churchgoers are forced to go against traffic to enter the place of worship, resulting in frequent traffic accidents.

“While he was alive, Pastor Song repeatedly wrote letters, asking to arrange for a safe crossing on Jianshe Road leading to the church. No matter how many government officials he contacted or how many queries he wrote, they wouldn’t open up a safe path to the church.”

“Look at how the suicide note was written. No matter how much he was running around, and no matter how much he humbled himself, the government still wouldn’t resolve the issue. I get chills down my spine!” said a believer who is still choked up over the matter.

The mental torture of forced “sinicization”

“Pastor Song was persecuted to death by the government,” said a source who asked to remain anonymous. “The government forced church clergy to visit the Temple of Confucius in Qufu city in the eastern province of Shandong to study traditional culture and patriotic ideology. During the studies, Pastor Song was so upset that he couldn’t eat. The government made him preach about patriotism, Confucius, and Mencius. He felt uncomfortable with this. He said that it was against the will of the Lord.”

The issue of the church’s funding also put Song Yongsheng under immense pressure, since the government controls all donation money and must review every expenditure by the church’s dozen or so clergy.

“The government reviews the church’s finances once in a while, but rarely allocates money to the church,” the source revealed further. “Church co-workers aren’t getting paid. Isn’t the government leaving them to suffer hungry in the cold?”

One more matter has put Song Yongsheng between a rock and a hard place: In June, Pankou Church in Shangqiu invited two out-of-town preachers to organize a training course that was expected to last for 15 days but ended prematurely after someone reported about it to the authorities. As a result, the district’s Religious Affairs Bureau ordered Pastor Song to fire two elders and three preachers who were involved in the matter.

“Pastor Song believed that this would create a schism. He was unwilling to punish these people,” said a source. In the end, the five personnel were suspended from their preaching duties for one year.

As the chairman of the Two Chinese Christian Councils, Song Yongsheng was required to maintain a high degree of unanimity with the government. At the same time, he sought to retain faith in his heart. In his suicide note, Pastor Song said that the city’s Two Chinese Christian Councils are “four unlikes”: “unlike a church, unlike a government agency, unlike an association, and unlike a company.”

“The cross has been removed from the church and the national flag raised at the church. The core socialist values have also been posted at its entrance. It doesn’t even look like a church; it’s a bit like a government training class. By altering people’s faith, aren’t they driving people to their deaths? I guess there is no authentic faith anymore,” a Shangqiu resident said.

After Pastor Song’s suicide on July 17, police tape was put up around the church, and believers were unable to enter it. All they could do was cry outside the church. At 2:00 p.m., the WeChat group of the church’s congregation was shut down.

Two days after Song Yongsheng’s death, government officials ordered to cremate his body. The crematorium on July 19 was heavily guarded, with pedestrians and vehicles alike restricted from approaching. Some believers took photos, but plainclothes officers at the scene stopped them and ordered to delete the images.

The first Sunday after Song Yongsheng’s death, the sermon held by a church that he was once in charge of was about “viewing the kindness of the core socialist values from Biblical knowledge.” More than 30 government personnel and plainclothes officers surveilled the church, stopping anyone who attempted to take photos. Some believers were crying but were not allowed to make any audible noises.

Perhaps Song Yongsheng hoped that by martyring himself, he could stir people’s vigilance or put pressure on the government. But he most probably never took into account that under the CCP’s tight control, any information deemed unfavorable to the government would be immediately blocked.

Song Yongsheng may not represent all Christians in China, but his story is a depiction of the plight of Three-Self Church believers. Behind the religious persecution that Bitter Winter reports on every day, there may be many other people like Song Yongsheng. For them, religious persecution is not just the demolition of churches or arrests of believers – the spiritual suffering endured by people of faith cannot be quantified.