A roundtable featured, with many others, CESNUR and The Church of Almighty God. 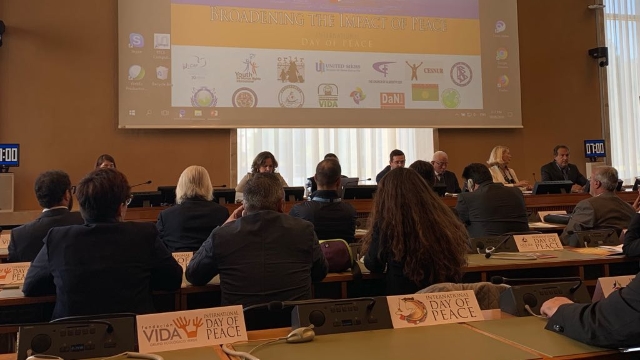 Religions: Resource or Problems for Peace?

On September 19, 2019, a well-attended side event on “Broadening the Impact of Peace” was co-organized at the United Nations in Geneva by Fundación Vida Grupo Ecologico Verde and Mejora – Fundation for the Improvement of Life, Culture and Society, together with a dozen of partners, including CESNUR, the Center for Studies on New Religions, the parent organization of Bitter Winter. The date was selected to celebrate the International Day of Peace.

I was asked to chair the second session, devoted to the contribution of new religions to the promotion of world peace. I observed that the first problem to be solved is whether religion in general is a resource or a problem for peace. This is one of the oldest problems in the academic study of religion. Paradoxically, the study of religion in the academia was started or influenced by social scientists who were not religious or had little sympathy for religion, including Karl Marx (1818–1883) and Émile Durkheim (1858–1917). At best, they believed that religion provided social control for the lower classes, a social need for Durkheim and the opiate of the people for Marx.

More recently, the rise of religious terrorism and clerical pedophilia led many secular philosophers and media to claim that religion is actually a threat to world peace. In fact, however, this question cannot receive black and white answers. There are terrorists who misleadingly invoke the name of God and pedophile priests and ministers of different religions, but there are also countless good people who serve their fellow human beings, the poor, the elderly, the sick moved by their religious faith. Sociologists such as Rodney Stark and Brian Grim have observed that, should all religion-based hospitals, drug rehabilitation centers, and social services disappear, the costs for democratic states to replace them would be so high that their economies would quickly collapse.

But What About New Religions?

New religions are particularly targeted by hostile media and often branded as “cults.” Every time one of their members commits a crime, or perhaps is falsely accused of one, they make headlines. But they do not make headlines when they contribute positively to society and peace.

In fact, if I have learned something in forty years of study of the new religions, is that they give a disproportionate contribution to peace issues. Comparatively small religions organize larger peace events and campaigns than some of the mainline ones. The objection that they do so to gain converts is silly. First, traditional religions may easily be accused of doing the same, and second, new religions often attract to their peace events presidents, prime ministers, famous figures of science and culture, and even leaders of the mainline religions. Surely, they cannot expect to convert these luminaries to their faith.

I mentioned among several examples one concerning China, The Church of Almighty God. This is a group heavily persecuted in China, which announces a message of resistance to evil and peace in several countries, particularly through songs, videos, and movies. The latter have won awards in festivals organized by groups whose theological beliefs are far away from this Church.

A Witness from The Church of Almighty God

Sister Li Xiaohui of The Church of Almighty God also participated in the session. She observed that “since the CCP took power, it has always been cruelly suppressing and persecuting Christianity. In recent years, it is endeavoring to eradicate all religious faiths. In broad daylight, the CCP destroys churches and removes crosses. It also burns Bibles and arrests and tortures Christians. The Church of Almighty God alone has suffered a million arrests. Many were tortured and more than a hundred died as a result. What’s more, about 600,000 Christians from our Church were rendered homeless and are fleeing to escape the CCP’s arrest. A large number of mosques, and Buddhist and Taoist temples were laid waste. And several million Muslim Uyghurs are locked up in concentration camps.”

“Of course, added Sister Li, we do realize that peace in the world is threatened by many other evils. All autocracies have to be eradicated for the world to live in peace!” She also noted that “many fear the totalitarian evil powers and dare not voice out. Can we truly achieve our goal of world peace if everyone chooses to do the same? Today, several million people from Hong Kong have stood up. They have sworn to fight against the CCP until the end and not accept any compromise. Many groups suffering from the CCP’s persecution home and abroad have united as well, firmly rejecting the CCP’s tyranny.”

Sister Li mentioned the “large number of films, choir performances and variety shows” produced by her Church denouncing the persecution in China. She also noted that members of The Church of Almighty God “have also been actively participating in human rights activities in various countries abroad, supporting Uyghurs, Tibetans and democratic dissidents.” She concluded by quoting from the scriptures of The Church of Almighty God, teaching that those who persecute and oppress believers will incur the wrath of God and that, although this may seem unlikely now, in the end peace and righteousness will prevail.

Although several initiatives in the world celebrated the International Day of Peace, it was a strength of the event in Geneva to focus on the contribution of religions, including new religions, to the struggle for harmony and justice.

I concluded that it is great time to recognize that new religions give a crucial contribution to the cause of peace and social betterment. In the world of new religions, just as in the world of the old religions, politics, or science, not all are saints. A few are scoundrels. Most, however, sincerely work for making this planet a better place—and most do not deliver their services to their members only.