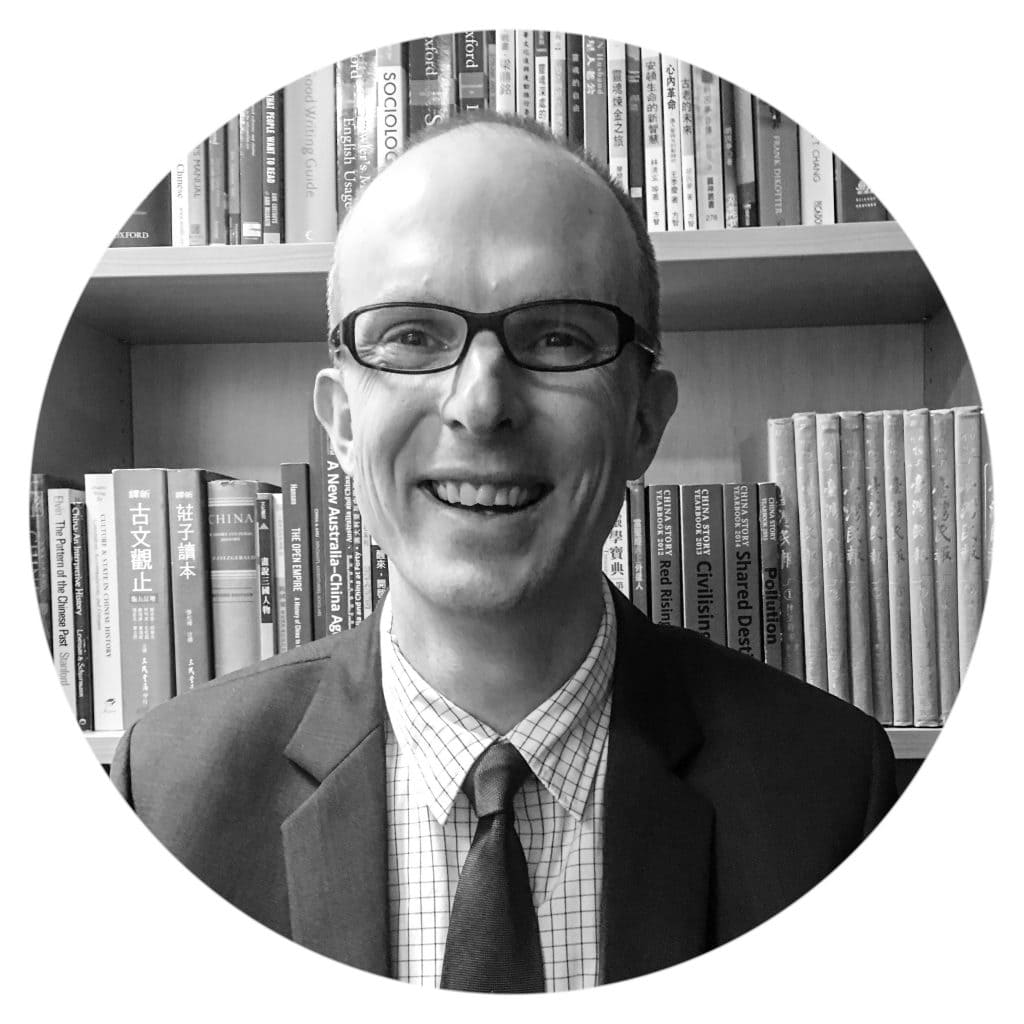 Australian scholar Paul Farrelly, the leading expert on New Age in China, tells Bitter Winter how New Age literature and teachings came from the West to Taiwan, and from there to Mainland China. Unless it challenges the status quo, New Age appears to enjoy a surprising toleration in China.

Dr. Paul J. Farrelly graduated with a PhD from the Australian Centre on China in the World at the Australian National University in December 2017. His doctoral dissertation was a cultural history of the New Age in Taiwan and he has a broader interest in new religious movements there and in China. He is the principal of Capital Academic Advisory and, in his spare time, maintains what many regard as the world’s largest archive of the visual culture of the New Age, Altered_Statuses. He was recently appointed co-editor of The China Story Yearbook 2018.

Bitter Winter has interviewed him on the little-know subject of the New Age in China, where it arrived via Taiwan, and on the attitude of the Chinese authorities towards New Age literature and teachings.

How did the phenomenon known in the West as the New Age come to Taiwan?

Beginning in the late 1960s, the New Age was gradually introduced to Taiwan through occasionally published translations. In 1989, it became codified with the launch of the Fine Press’s 方智出版社 ‘New Age Series 新時代系列’. The first book that fits broadly into the New Age milieu (and indeed was later reprinted as part of the New Age Series) was Kahlil Gibran’s The Prophet, translated by C.C. Wang 王季慶 and serialized in 1969. Wang published three translations of Jane Roberts’s Seth revelations in the 1980s and other authors translated into Chinese and published in Taiwan before 1989 include Fritjof Capra, Emmanuel Swedenborg, and George Gurdjieff. In the pre-internet years, along with book shops such as the still-open Making Life Buddhist 佛化人生, reading groups coalesced around popular publications. The first book by a local author to specifically address the idea of a ‘New Age’ or ‘New Age movement’ was Ancient Future 古老的未來 (1990) by the retired actress Terry Hu 胡因夢 (you can read her chapter on New Age music).

Within these broader historical processes, the lives of C.C. Wang and Terry Hu are full of encounters, setbacks and revelations that speak to a much more complex process of introducing the New Age to Taiwan, especially with regard to the role of the USA, the practice of translation, and of Taiwan’s place in broader geo-political changes. I discuss this in more detail in my thesis and in some of the articles available on my website.

How successful was the New Age in Taiwan?

I think it has been extremely successful. Every bookshop I have visited over the last ten years has a decent collection of New Age publications (these days they are often classified as ‘Mind, Body, Spirit shenxinling 身心靈’, especially in China). Nearly thirty years after it started, the Fine Press’s New Age Series continues to publish new translations (and occasional original texts by sinophone authors). Several local authors have published their own understandings of the New Age and associated ideas. And there is an almost endless stream of workshops that those with enough disposable income may attend.

Some authors from Taiwan such as Lei Chiu-nan 雷久南 (who, as far as I can tell, was the first author to specifically write about shenxinling) have followers in the USA and South East Asia. Hsu Tien-sheng 許添盛, who integrates the teachings of Jane Roberts’ Seth with his own training as a medical doctor, has even visited Australia, where I attended his Chinese-language sessions at the Sydney Tzu Chi center 慈濟功德會. Importantly, various teachers from Taiwan who have found audiences in China are well-placed to promote their work due to their linguistic and cultural affinities and teaching experiences at home.

Do you believe the New Age in Taiwan to be still successful today?

Yes, I do. While, as I mentioned above, it is more commonly called shenxinling these days, New Age teachings are firmly embedded in Taiwan and I am constantly surprised by the random people I meet who have an awareness of a certain text or teacher. Taiwan is a global hotspot of new religions (and religious activity more generally) and the New Age has grown to complement this environment, taking on a form slightly more in tune with local culture; the New Age must be considered in any broader study of spirituality in contemporary society there.

At the CESNUR 2018 conference, you presented a paper on Tiffany Chang. Who is she, exactly?

Tiffany Chang 張德芬 is a Taiwan-born and Beijing-based teacher, author and translator. She is currently the highest profile proponent of shenxinling teachings in China. Before Chang began focusing on spiritual matters, she had developed a public profile in Taiwan as a television news journalist and had written on various topics, such as her new life in Beijing. She translated Eckhart Tolle’s A New Earth in 2008 and published her best-selling debut novel Encountering Your Unknown Self 遇見未知的自己in 2007. This book captured the interest of readers in Taiwan and in China, and kickstarted her career as a spiritual figure. In 2018 she has a popular WeChat account and continues to publish regularly – travelling around China in 2017 and 2018 I found her books prominently placed in shops all over the country.

You have written extensively on a movement known as Huan-ting zen (黃庭禪, HTZ). Can you summarize its origins, history, and teachings?

I first came across HTZ when living in Taipei in 2010. A pipa 琵琶 teacher told me about the group, mentioning that it combined traditional Chinese thought and modern psychology. My interest piqued, I visited the group and interviewed its founder, Chang Ching-hsiang 張慶祥.

The group was registered legally in 2004 and can be considered a type of guoxue group 國學  (the study of Chinese culture). It has a base in the mountains south of Taipei and a small center in Xindian, in New Taipei City. Essentially, the group combines elements of ‘traditional Chinese culture’ (Confucianism, Daoism, Buddhism) with a version of modern psychology and various New Age influences. Chan 禪 (zen, the third character in the group’s name) is represented as an indigenous Chinese psychology that, due to millennia of practice and development, is more advanced than conventional modern psychology. The group believes that we are all animated by an energy center called the huangting 黃庭, as seen in the first two characters of the group’s name. The manner in which one responds to any situation – our emotional response – is dictated by one’s huangting. By getting to know and understand how it operates, humans can approach life with greater equanimity, or so the group believes.

Any readers interested in HTZ are welcome to read my article on its ‘action zen’ training program and a book chapter I wrote on how it uses media technology in its workshops and other practices.

When and how did HTZ and the works of Tiffany Chang travel from Taiwan to Mainland China?

Tiffany Chang has lived in Beijing since the mid-1990s, where at one stage she worked for IBM. HTZ has taught classes in China since 2009. While travel between Taiwan and China has been easier since 1987, especially for those from Taiwan, cross-Straits movements greatly increased after the Kuomintang government of Ma Ying-jeou 馬英九 (2008-2016) opened up direct flights from China and allowed larger numbers of Chinese tour groups, and later individual tourists, to visit Taiwan. It is not just that Chang and her assistants could visit China to conduct retreats and promote HTZ in various fora, students from China could visit Taiwan with relative ease. While conducting fieldwork in Taiwan in 2012 I met many retreat participants from China and it has been interesting to observe how, for some Chinese, Taiwan exists as an idealized space ripe for spiritual exploration and self-cultivation.

We know that in Mainland China there are campaigns and even laws against “spreading superstitious teachings.” How did the New Age ideas and HTZ get away with them, and what is the current attitude of the Chinese authorities towards these ideas?

HTZ, Tiffany Chang, and any other politically-astute teacher can generally circumvent these rules. And given the ambiguity about whether the New Age is a religion or is religious, it can avoid detection – one just has to represent it as traditional culture and not a religion.

Why in your opinion were authorities in China more tolerant of HTZ than they were of the teachings of Master Ching Hai, which are included in the list of xie jiao, not to mention of course Falun Gong?

HTZ is a far smaller group than Falun Gong or those influenced by Ching Hai. HTZ’s founder, Chang, also appears to have adroitly read the ever-shifting political climate in China and targeted his efforts in a manner that rather than attracting suspicion, actually co-opts the political system. For instance, he presented at an official conference on positive psychology and collaborated with authorities on an employee assistance program in Kunming.

President Xi Jinping also uses the expression xinshidai (新時代), the same that was once used to translate “New Age.” Is this just a coincidence?

Xi Jinping’s xinshidai is translated as ‘new era’ instead of ‘New Age’. And as much as I would like to think that Xi has been reading the Seth revelations and Conversations with God or taking policy advice from Tiffany Chang, his choice of name is likely a coincidence. What is interesting here are the connections we can find between the individual-centric commercial-based spiritual transformation of Taiwan’s late twentieth-century xinshidai and the accelerated Han-centric domestic control and reordering of global norms and institutions that are inherent in Xi’s xinshidai.