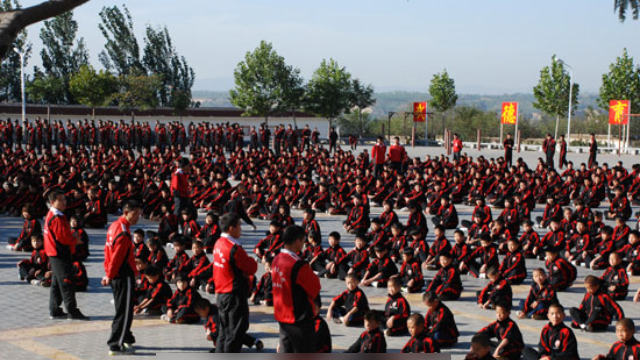 Famous schools must cut all ties with their historical past, shedding robes and statues and names that evoke their Buddhist origins.

Martial arts students are used to delivering – and taking – hits, but they have never suffered a blow like the one delivered by the Chinese Communist Party (CCP)’s crackdown on Buddhism. Buddhist symbols have been stripped from the Shaolin Temple martial arts schools, the world-famous home of Chinese martial arts.

Located in Dengfeng city, in central China’s Henan Province, the Shaolin Monastery is known around the world and is the ancestral home of Chinese Buddhism. The place where the founder of Chinese Buddhism lived and propagated his teachings is known as the “Number One Temple Under Heaven.” Numerous martial arts schools have been established under the name of the Shaolin Monastery, inheriting Buddhist thought, and carrying forward the traditional Shaolin culture and the spirit of Chinese martial arts.

In July 2018, Dengfeng city’s United Front Work Department, Education and Sports Bureau, and Ethnic and Religious Affairs Bureau jointly issued a document entitled Implementation Plan for Carrying Out Special Governance Work for the Separation of Education and Religion at Schools Throughout the City. The document stipulates: 1.) Setting up Buddhist shrines at schools is prohibited. 2.) School teachers and students are prohibited from wearing religious attire or wearing religious symbols. 3.) Sensitive words with religious connotations (such as “Buddhism,” “Ancestral Temple,” “Arhat,” and “Bodhidharma”) must be removed from the names of schools. 4.) Each school and martial arts college must establish a dedicated administrative body and assign personnel to submit day-to-day information regularly as a way to monitor the school.

The document set off a campaign to crack down on religious symbols on school campuses throughout Dengfeng city. Due to the strong Buddhist connotations they carry, Shaolin martial arts schools were a prime target.

On October 31, four provincial government officials arrived at Shaolin Temple Monk Disciple Kung Fu Academy to conduct an inspection. Upon seeing that the school’s coaches and students were wearing yellow-colored monk robe uniforms, the officials ordered them to change out of them immediately.

During the inspection, government officials took photos of a Buddha statue in the school’s Buddhist shrine, and a Bodhidharma statue outside the shrine.

Afterward, the school headmaster was forced to take drastic steps to avoid the academy being shut down. He removed the Bodhidharma and the Buddha statues, hung traditional Chinese paintings on the walls, and changed the school uniforms for more than 1,000 teachers and students. The financial burden of replacing the uniforms nearly crushed the school.

More than just physical changes were required. In the past, the school’s students followed Buddhist tradition by addressing the headmaster as “great master,” but now they are only allowed to call him “principal.” Since the words “Monk Disciple” in the school’s name have Buddhist connotations, the school changed its name to “Shaolin Literary and Martial Arts School.”

One of the academy’s managers told Biter Winter, “The Education and Sports Bureau demanded to change the school’s name and uniforms within one month. Every Monday, we must raise the national flag. Afterward, we must send photos [of the flag-raising ceremony] to the Bureau by Wednesday. If they aren’t sent in time, the school’s qualifications will be revoked. Martial arts schools must take the ‘red road.’ This is a political movement.”

Around the same time, another school in Dengfeng underwent an unannounced inspection. The authorities ordered that the students of Shaolin Temple Monk Literary and Martial Arts School be prohibited from wearing monk robes, shaving their heads, and addressing their coaches as “great master.” The school was forbidden to put up plaques, paintings, photographs or Buddha statues that contain the Chinese characters for “monk,” “temple,” “Buddhist,” “Buddha,” and so on. Since the school’s name contained the word “monk,” the school was forced to change its name to “Zhongyue Shaolin Literary and Martial Arts School.”

A third school, located on the mountain behind Shaolin Temple, was ordered by to get rid of its Buddhist attire, statues, and plaques. The Shaolin Temple Monk Martial Arts Academy’s faculty and staff were prohibited from carrying Buddhist prayer beads, bead bracelets, and other religious accessories, and banned from taking group photos while wearing monk robes. The school’s name was changed to “Shaolin Martial Arts Mount Song School.” The slogan on the school’s wall, “Namo Amitābhāya,” (“Homage to Infinite Light”) was replaced with “Love the Party, Love the Country, Love the School.” Under orders from the authorities, the school raised the national flag, and “red” slogans such as “Don’t forget your initial intention; remember your mission” and the “Core Socialist Values” were posted at the school’s entrance.