Since April this year, Korean missionaries in various parts of China have experienced increased scrutiny and harassment resulting in the closure of Koreans Christian churches. The crackdown intensified after the adoption of the Special Work Program for Investigation into and Prosecution of the Infiltration of Korean Christianity According to the Law. The document, prepared by the United Front Work Department of the Central Committee of the Chinese Communist Party (CCP), the Public Security Bureau and the State Administration for Religious Affairs requires government departments of all levels to further intensify investigation and prosecution of Korean Christian organizations in China.

On April 10, 2018, Li Qianghao’s landlady, Ms. Jiang, received a phone call from an officer at the State Security Bureau in Hegang who was asking about her tenants. When Ms. Jiang, who is also a Christian, realized that the CCP police wanted to arrest Mr. Li, she refused to answer the questions and hung up the phone. Having not received any answers from Ms. Jiang, the police rushed immediately to the housing development where Li Qianghao lived. They ordered the security guard on duty to open the elder’s apartment door intending to arrest him. The security guard and the property manager asked the police whether they had an arrest warrant, to which the police responded fiercely, “We’ve watched them for a long time and discovered that they have illegal meetings. We don’t need arrest warrants to arrest Christians!” Mr. and Mrs. Li were not at home, and the police went away empty-handed.

That afternoon, Mr. and Mrs. Li were coming back from a trip when they learned about the police’s intentions. Mr. Li told the believers to destroy any information about the gospel and not to call each other, so as to avoid leaving any evidence or being arrested because their telephones were probably monitored. The elder and his wife took some of their belongings and hurriedly fled Hegang. 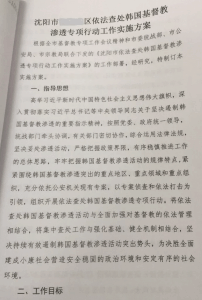