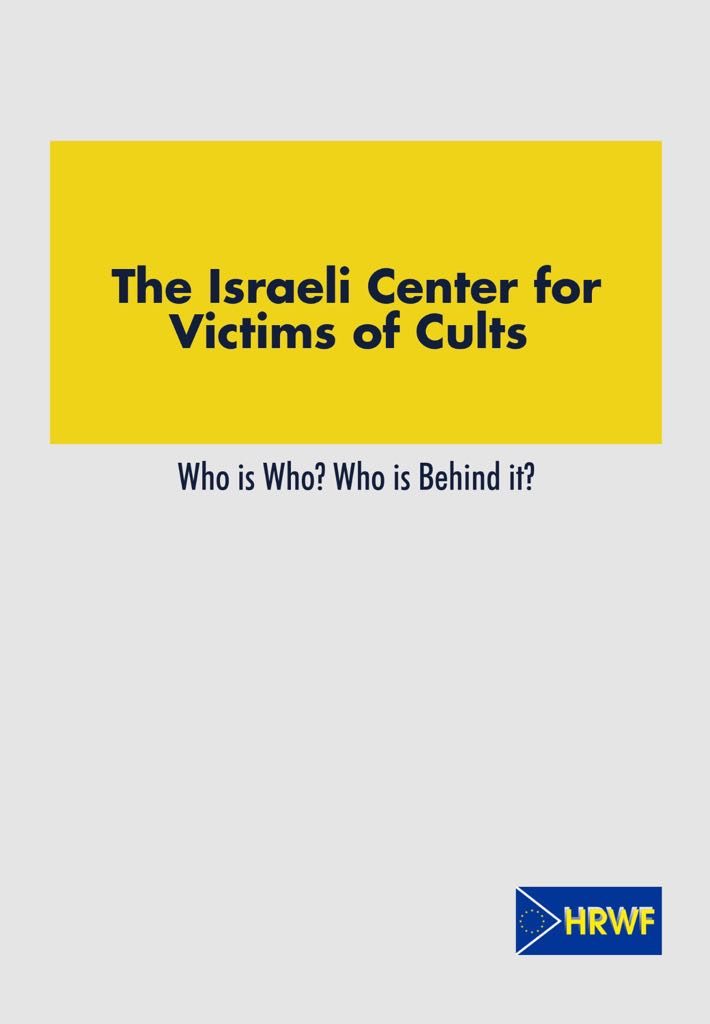 A new report on the Israeli Center for Victims of Cults reveals the links between the Chinese Communist Party and an international network of groups defaming religious minorities as “cults.”

The Belgian NGO Human Rights Without Frontiers released on September 4 a report on the Israeli Center for Victims of Cults (ICVC), the Israeli branch of an international network of so-called anti-cult organizations, most of them affiliated with the European Federation of Centres of Research and Information on Cults and Sects (FECRIS). Scholars have studied for many years the international anti-cult movement and its nefarious role in stereotyping unpopular religious minorities as “cults,”  claiming that they “brainwash” their members and separate them from their families. Years of scholarly research of new religious movements have debunked anti-cult theories as pseudo-scientific, and simple tools used to discriminate against groups the anti-cultist do not like.

The new report shows that the allegedly secular Israeli Center for Victims of Cults, the Israeli correspondent of FECRIS, has in fact deep ties with Yad L’Achim, an organization officially denounced by the U.S. Department of State as a radical expression of ultra-Orthodox Judaism, which promotes discrimination against religious minorities in Israel and violence against them.

The report exposes Yad L’Achim’s connections with the Chinese Communist Party (CCP), which are typical of anti-cultists in several countries. Bitter Winter has recently reported on how South Korean anti-cultists cooperated with the CCP in organizing false “spontaneous demonstrations” against refugees of The Church of Almighty God seeking asylum in South Korea.

The report notes that “in 2009,  Yad  L’Achim  published  a  press  release  in  which  they  boasted  the  fact  that one  of  their  organization’s  representatives  was  invited  to  participate  in  a  congress  in  China devoted  to  the  fight  against  Falun  Gong. The  propaganda  of  Yad  L’Achim  against  Falun  Gong is  accessible  on  their  website,” which also offers  “an  article  on  Benjamin  Kluger, a convert from Christianity to ultra-orthodox Judaism and a Yad L’Achim activist, who worked in the Department for the Fight against Missionary Activity with Rachel Lichtenshtein, the current director of the ICVC. He was invited by the Chinese embassy in Israel as  ‘an expert from Yad L’Achim about destructive cults’” to a CCP conference in China. Rabbi  Shalom Dov Lipschitz,  Chairman of Yad L’Achim,  stated  that the  government in Israel should have “learned from the Chinese authorities how to forcefully fight dubious and destructive  cults.”

The report noted that the CCP also invited other “FECRIS  representatives: the ill-famed Alexander Dvorkin from Russia, who fully supports the repression of Falun Gong practitioners in China and campaigns against the movement in his own country, and the well-known deprogrammer Rick Ross, who was prosecuted in several US criminal cases, yet still praised by  the  ICVC.”

Recent events in Korea proves that the CCP uses anti-cultists as “fellow travelers” to justify its persecution, torture and extra-judicial killings of members of religious movements it classifies as “cults.”