Authorities destroy a Three-Self church in a Henan county, promising to rebuild it, but instead, clamp down on the construction of a new one. 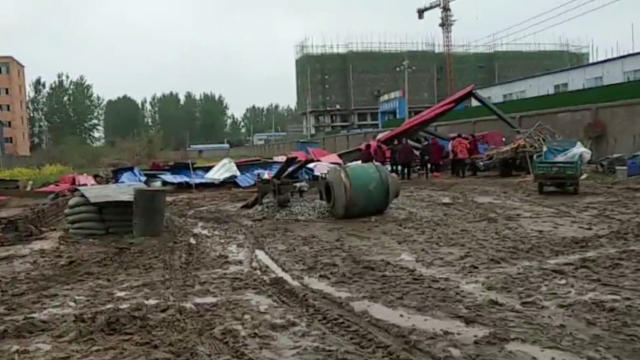 On April 9, the authorities of Ningling County Industrial Cluster Zone, under the jurisdiction of Shangqiu city in Central China’s Henan Province, demolished the frame for Qiaoyuan Three-Self Church’s new building, the construction of which they approved just a month earlier.

This was not the first time that members of this congregation suffer from the manipulations by the government and lose their place of worship. According to believers, in August 2017, the local authorities ordered to demolish their original church to make way for the construction of a new road. The church had all necessary registration documents and was approved by the government, so the county’s Ethnic and Religious Affairs Committee and the Industrial Cluster Zone Management Committee signed a contract with the church, according to which, a new plot of land would be approved for the church to be rebuilt.

However, for nearly two years, the authorities were dragging feet in fulfilling their promise, despite the church leadership’s repeated nudges.

Finally, in mid-March this year, the authorities processed the approval for the new church and allocated a plot of land. However, as soon as the reconstruction started, the church faced all kinds of obstructions from the county’s Urban Construction Bureau and Land Bureau. To prevent officials from hindering the construction of the church, members of the congregation used benches to block off the gate to the site, and over 30 elderly believers stayed guard day and night.

But the government didn’t give in and toughened up their measures. On April 5, the supply of electricity to the construction site was cut off. Officials ordered the police to arrest the supplier of the building materials for the church and imposed on the church a fine of 2,000 RMB (about $300).

On April 9, the newly built frame for the church was demolished. Believers told Bitter Winter that to do so, over 100 personnel from various county departments were mobilized, directed by the county’s deputy mayor. The church’s head, in his seventies, and more than a dozen believers held onto the church’s frame pillars to prevent the destruction, but they were forcibly dragged away. A member of the congregation in her eighties started having convulsions and was taken to a hospital for emergency treatment.

Video 1: Believers are being forcibly carried away, and the newly constructed frame for the church is demolished, amid the cries of believers

The cries of the distraught believers didn’t stop an excavator from razing to the ground everything that the congregation managed to build in a few weeks. Along the way, the excavator smashed electric vehicles and other believers’ possessions, and most importantly, their hopes of having a new church.

The church’s head said in tears: “We already paid 600,000 RMB (about $89,000) to the contractor, and the church’s frame had been built. But the government cut off the water and electricity supply and obstructed the construction. In an instant, the entire church has been destroyed. Who will compensate us our losses?”

After the demolition, dozens of elderly believers went to the county’s Industrial Cluster Zone Management Committee to seek justice. Officials not only failed to resolve the matter but even threatened to revoke the believers’ minimum living subsidy and detain them if they continued petitioning. Having no other choice, the believers were forced to give up their efforts.

In their efforts to suppress religious belief, China’s officials are not shying away from lies and manipulations. In numerous reported cases, first, churches, even those that had been approved by the government and deemed “official,” are declared not safe to assemble, illegal or need to be moved for other made-up reasons. They are then demolished, often promising believers to assist in rebuilding a new church elsewhere. In reality, however, as soon as churches are razed to the ground, the authorities make excuses to hinder the process, eventually, leaving believers without a place to worship. And the number of such homeless congregations in China is growing exponentially with each day.