To celebrate the 70th anniversary of the Communist Party rule, China’s capital prepared a “gift” for believers by closing down their places of worship. 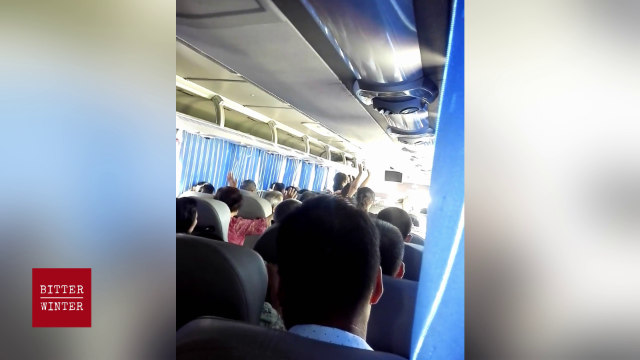 Ahead of the celebrations, dedicated to the anniversary of the founding of the People’s Republic of China, the country’s capital intensified “social stability maintenance” measures, primarily targeting religious venues that are not approved by the state. Despite the government’s attempts to make these house churches disappear, their congregations continue preserving their faith.

Shortly after 8 a.m. on July 28, residents of a village in Beijing’s Changping district felt despair and anxiousness filling up the air of the quiet Sunday morning, when they saw half a dozen police officers storming a house church meeting venue. The officers brutally threw out on the street the church’s belongings and shut the place of worship down, claiming that believers’ gatherings were “disturbing people.” The congregants were threatened never to step foot into the church again.

A village resident told Bitter Winter that this church venue was established six years ago; all its members are law-abiding citizens, and neither they nor their gatherings had ever disturbed anyone in the village.

The behavior of police officers also angered the landlady of the closed meeting venue, but she was helpless to do anything. Village government officials have previously threatened to revoke her pension if she continued renting her property to Christians. The woman believes that having a religious faith is a good thing, and people’s choice to do so should be protected. Unfortunately, the Chinese government doesn’t agree.

A government insider confirmed that ahead of the National Day celebrations, the authorities had intensified measures to suppress religions. “People aren’t allowed to believe in any religion, whether Christianity or Islam,” he said. “As soon as any religious believers are discovered, they should be driven away.”

Believers forced to pray on a bus

Another house church venue in Beijing was dispersed in preparation for the anniversary celebrations. After their place of worship was shut down in the capital’s Chaoyang district, the congregation decided to meet for a Sunday gathering on a bus.

On August 25, believers filled all 50 seats on the bus, despite the dangers they could face if found out. With doors and windows closed for security, there was hardly any air on the bus. The pastor encouraged believers to remember their mission to share the gospel, even in the face of persecution. He also said that such a scene of believers gathering on a bus could only be witnessed in China.

Video: Believers are holding their gathering in secret on a bus.


According to a congregation member, their church was founded ten years ago by a South Korean pastor. Because of the continuous and growing persecution by the state, the church had to move several times after each new venue was shut down one after another. Last year, accused of conducting “illegal missionary activities,” the pastor was prohibited from entering China – a customary measure the regime imposes on missionaries from abroad, as it wages the war against “foreign religious infiltration.”

To ensure that the gathering went smoothly and believers are safe, a member of the congregation stood guard outside the bus, watching out for any unexpected visitors, like the police coming to arrest them.

In June, another house church meeting venue in Chaoyang district was shut down. To evade the government’s suppression, the church’s pastor had to think of ways to continue their faith-related activities in secret. It was decided that the congregation should meet in small groups. Some even gathered to pray covertly in a café.

In early August, people who came to a nursing home for the elderly in Zhangjiakou, a prefecture-level city in Hebei Province, bordering Beijing to the south, found its door tightly shut. They had to press a buzzer by the door and then prove their identity to the personnel to be allowed in. The nursing home’s director closely observed what was happening outside on the screen of an electronic monitoring system in his office.

The reason for such increased security was that some Christian residents of the nursing home were holding a religious gathering that day, and the director was making sure that they are not found out.

“Someone reported the nursing home about a week ago, and officials from the local United Front Work Department came to warn us not to hold religious gatherings. They ordered the director to sign a statement promising to ensure that this never happens anymore,” a believer explained to Bitter Winter, adding that if officials from the Department find out about their religious activities, the nursing home will be shut down, and the director could face detention.

“Ahead of the National Day, the regime is strengthening control over religion,” said the person in charge of a Three-Self church meeting venue in Hebei’s Tangshan city. He also revealed that the United Front Work Department has now established two management plans targeting Christians. The first is a “return visits” system, which entails reinvestigating and shutting down religious venues that had escaped closure during earlier investigations. The second is the establishment of a hotline to report Christians. To evade persecution and possible arrests, the church director warned believers to be cautious and hold gatherings in secret.