The CCP is training abbots as mouthpieces to spread propaganda and requires temples to undergo standardized management assessments. 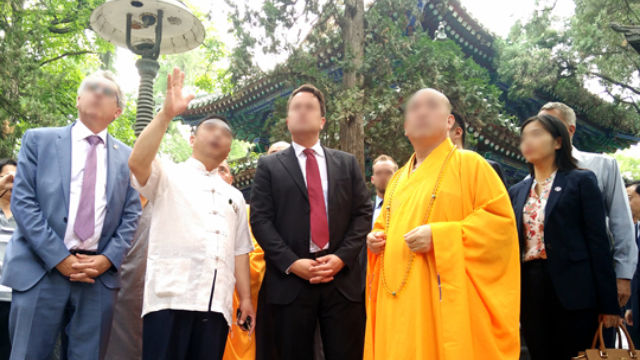 Don’t be surprised if you hear personnel from government-approved religious venues say that China has full religious freedom, because the CCP is actively grooming envoys among the official clergy that are taught to spread the “good” word.

The person in charge of a temple in the eastern province of Zhejiang recently gave an interview to Bitter Winter. To avoid retaliation from authorities, he was unwilling to disclose his name.

The interviewee said that his temple receives numerous tourists every year, many of them from abroad. The temple, however, is in the name only –it is primarily used to spread CCP’s propaganda to the outside world. He also revealed that the government requires abbots at local temples to attend courses on international affairs, in particular, China’s relations with Japan and the US. They also learn about China’s advanced weaponry, business management, and other related matters. This is all done to prepare the abbots for receiving foreign visitors and teach them what they should say.

Also, temple abbots must receive specialized etiquette and official protocol training, such as welcoming foreign guests at airports, serving tea, showing visitors around, and alike. Special attention is given to details for receiving guests from Hong Kong, Macau, and Taiwan, teaching abbots about sensitive topics that should be avoided – hosts must always act and speak within limits prescribed by the government.

“Certain topics cannot be discussed casually. For example, if someone asks how we regard the Dalai Lama, our view cannot be contrary to that of the government; there will be trouble for us,” the person in charge explained, unable to hide his discontent. “All of these things are very complicated. When Taiwanese visitors come, some topics cannot be discussed because government personnel are always by our side, and every word we utter will be recorded. If we say something wrong, we will be reprimanded.”

An abbot from the southeastern province of Fujian confirmed that he too is obliged to report to the Religious Affairs Bureau regularly, especially foreign-related matters. For example, when Tibetan Buddhists from abroad or people from Hong Kong, Macau or Taiwan come to visit the temple, he cannot take photos with them; once officials from the Religious Affairs Bureau find it out, they will come to conduct an inspection and accuse him of being a separatist.

The interviewed person in charge disclosed that state-approved temples must undergo an assessment of “advancement,” organized by the local China Buddhist Association at the end of each year. It includes evaluations of individual advancement of each employee and collective progress of the place of worship as a whole; just like yearly evaluations in enterprises and public institutions. Some temples must also undergo national standardized quality management evaluations to receive International Organization for Standardization (ISO) certification 9001, proving that a temple’s management system is effective and appropriate. Mostly used for companies and organizations, ISO evaluations assess various products or services by proposing management improvements.

A mainland China media outlet reported in February that Lingyin Temple in Zhejiang’s Hangzhou city formally became the first Buddhist temple in the country to achieve ISO9001:2015 quality management systems certification. The report states that the move was made to strengthen the management of the temple and is an effective extension of implementing the new Regulations on Religious Affairs and other related laws.

In response, social media was flooded with comments on the absurdity of these steps by the government, like: “What are the measures for gauging customer satisfaction in temples?” “How can a scientific management system guarantee client satisfaction for making a wish or the number of times a Bodhisattva appears?” “Was a satisfaction survey sent to Buddha? Does Buddha have any objections?”

The person in charge said that it is as if the temple has become an enterprise or institution under the CCP’s command. He thinks that this is an outcome of “following the path of religion with Chinese characteristics” – “sinicization” of religion policy advocated by President Xi Jinping.

“Following the path of ‘sinicization’ and accepting government management wasn’t the original intention of abbots,” the person in charge said helplessly. “But if you don’t follow the government’s requirements, or if you disobey the Party, the state will shut down your temple.”

“It’s like holding a scalding earthenware bowl – you’re in great pain and agony, but you cannot put it down,” the person in charge ended the interview, attempting to best describe the plight of people of faith in China.