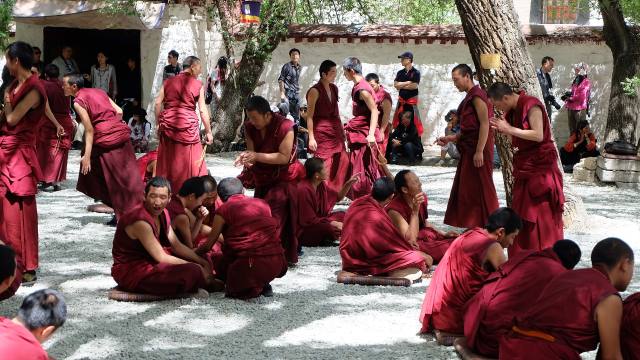 The performances are enacted to frame the person and make him look bad enough so he could be deported.

Recently, Human Rights Watch issued a report as per which the Chinese authorities use the so-called “illegal organizations” as a pretext to destroy the Tibetan society. The Chinese Communist Party often seeks to classify dissent and religious faith as “extremism” to persecute believers.

Bitter Winter has learned of an incident from Jilin’s Baishan city where the authorities staged a performance to frame a local monk.

According to two sources, the Baishan City Public Security Bureau hired idle civilians to act as if certain local monks had wronged them. Police officials took on the role of playing those monks, wearing the Tibetan garb and so on. The group rehearsed at a local training base in Linjiang for a week. The civilians were paid 150 RMB per day for their work.

The act involved the “commoners” denouncing the “monks” for scamming them out of their money. The people shouted at them to return their money. Even the cars parked nearby had the words “return the money” written on them. In addition to this, video professionals filmed everything.

On the other hand, armed police officers wielding shields and guns stood guard. The head of public security bureau also showed up in a squad car, shouting through a loudspeaker. Ambulances were parked nearby as well.

It was an act rehearsed down to the last detail and designed to look like reality for a casual observer.

The act whipped up enough discontent against a particular monk. The authorities forcibly sold off his home in Jilin and deported him back to Tibet.

According to several commentators, acts like these are quite common in China. The CCP often uses these to frame religious groups and dissidents. In addition to suppressing the Tibetan dissidents, this tactic has been used against the 1989 Tiananmen student protest as well as the Falun Gong movement.