On April 11, authorities ordered to forcibly demolish part of a newly-built mosque in a village of Gansu Province and later arrested people who shared the news. 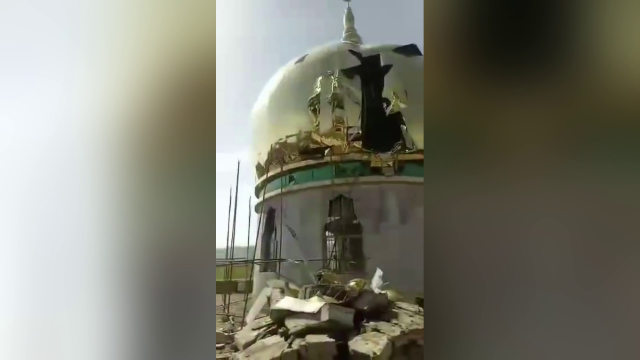 According to the source who provided the videos, the construction of the mosque in Gazhuang village, under the jurisdiction of Zheqiao town, in Linxia Hui Autonomous Prefecture of Gansu Province, was completed less than a month ago. The authorities hired a large crane to destroy the mosque’s dome and minarets, as well as the doors, windows, and walls.

The video shows not only the scene of the forced demolition but also the protests of the local Muslims, a few of them weeping on the ground, distraught by the destruction.

Video 2: The mosque being demolished, elderly Muslims weep on the ground.

A Muslim who was present at the scene recalled that the government officials claimed that the mosque was overhauled because its architectural style was “too Arabic.” However, the authorities have not consulted the local Muslim community before starting the demolition.

“There were no security measures implemented whatsoever; starting the demolition, they were like rabid dogs. The roof of the second floor was smashed,” said one Muslim who was at the scene.

According to a Deutsche Welle Chinese report, the local government has ordered the public not to forward any videos or photos of the demolition. The police later arrested several residents who recorded videos and shared them.

Bitter Winter has previously disclosed a confidential CCP document that orders Islamic venues to emphasize a “Chinese style,” removing any resemblance to “Arabic or Saudi style.” Bitter Winter has repeatedly reported on the removal or alterations of Islamic symbols and structures in various regions of China, such as the provinces of Hebei, Gansu, Shaanxi, and others.