As part of their curricula, the young are taught at schools that believing in God is abnormal; teachers encourage them to report on their religious relatives.

Since the adoption of the new Regulations on Religious Affairs last year, which, among other things, prohibit children from attending places of worship, schools around China have adopted unprecedented measures to keep students away from the matters of faith. The grooming of atheists starts at an early age – from kindergartens and primary schools.

The policy has resulted in predicaments for many families: children are taught to oppose their religious relatives, they suffer great psychological stress out of fear that their parents or loved ones could be arrested because they go to church. Families share their experiences with Bitter Winter.

Teacher says that Christianity is a xie jiao

A Christian woman’s son who attends primary school found a leaflet about Christianity at home. “My teacher says that Christianity is a xie jiao. If you believe in it, you will leave home and not take care of me. You might set yourself on fire, too,” said the boy with worry.

He then took out from his bag a school textbook, Morality and Society, and showed his mother its content related to xie jiao. The text also explains how to resist such religious groups. “The teacher told us during class that xie jiao groups are so terrible,” he said, asking his mother to tear up the religious leaflet.

The CCP has branded the religious groups that grow rapidly and are not under its control as xie jiao, which are severely prosecuted. Quite often, though, authorities use the label of “heterodox teachings” to crack down on Christian house churches and other religious groups that are not on the list of the xie jiao. The practice, it seems, has infiltrated schools as well, to manipulate and confuse young students. Questions about xie jiao are also included in the final exam for primary schools. 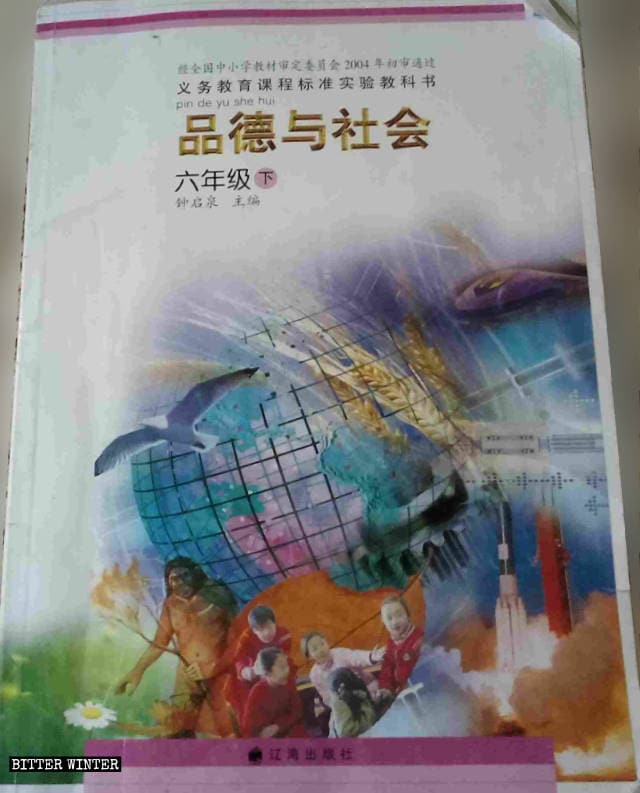 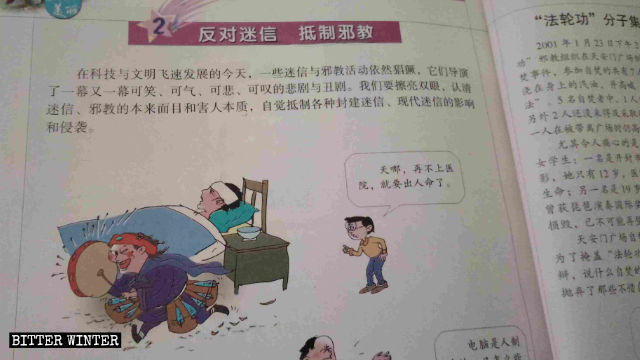 Fearing to cause trouble for her son and herself, the mother hid all religious symbols and other items related to her faith. However, this still did not ease the tensions with her son.

A month later, when her son found another religious leaflet in his mother’s bag by chance, he angrily took a fruit knife from the kitchen and fiercely poked several holes in it. Holding the pierced through leaflet on the knife, he threatened his mother to give up her faith, because “Christianity is a xie jiao,” and she “mustn’t believe in it.”

The woman was shocked by her son’s aggressive behavior. How could her once innocent and obedient child become so warped? What exactly had the school indoctrinated her child with?

“Before starting school, I told my child about God’s creation, and he believed it. But after being taught at school, my child is like a different person. In atheistic China, these pure and innocent children have been taught to hate God,” the Christian woman said bitterly.

The boy’s schoolmate said that he is now scared of seeing people from xie jiao groups self-immolating since a teacher told the class that some are prone to doing that.

Children encouraged to report on their parents

In late April, a primary school in Xinzheng city in the central province of Henan held a meeting for students on how to oppose religion. A headteacher told the students to be atheists and never believe in the existence of deities. “If your mom goes to church and believes in God, she doesn’t want you as her child anymore,” the teacher threatened.

Another primary school teacher in Xinzheng showed students an animated anti-religion propaganda film, in which believers are depicted as black monsters. The teacher also told students that religious people might hex them and that they should report to the police any believers they encounter.

A student’s parent in the school said that her son didn’t oppose her belief in religion initially, but after some classes, he started behaving entirely out of character, actively opposing his mother reading religious books. Parents of another student revealed that she feels scared, fearing that the police will take away her Christian mother.

Students at a primary school in Linzhang county, in the northern province of Hebei, were required to supervise their parents to make sure they don’t participate in any religious activities. As a result, a student urged his Christian father not to believe in God because it was abnormal and dangerous. “It leads to a dead end. If you attend gatherings, you will be arrested,” the boy said with worry.