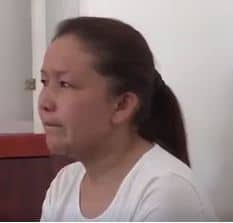 In a high-profile trial, a Chinese Muslim woman, who is an ethnic Kazakh and escaped to Kazakhstan with false documents, is threatened with repatriation to China.

Kazakh and international media are following with interest the trial of Sayragul Sauytbay, which started on July 14 in Kazakhstan. Sauytbay is a 41-year-old Chinese Muslim of ethnic Kazakh origins. She escaped from China with false documents, and for this reason was arrested in Kazakhstan, where her husband and two children have already fled, on May 21, after crossing the border. She now stands trial accused of illegally entering the country and is threatened with repatriation to China.

Sauytbay, who is seeking political asylum in Kazakhstan, reported at trial that, because of her Muslim faith, she was detained at one of the dreaded “transformation through education” camps, from where she managed to escape. She disclosed several details about the inhumane treatment of inmates in these camps.

Chinese diplomats were in the courtroom, and Sauytbay explained that, should she be forced to return back to China, she will be accused of disclosing state secrets, a crime for which she may easily be executed, since by definition everything about the “transformation through education” program is regarded as a state secret.

The case is obviously similar to the one involving Sister Zou Demei, a leader of The Church of Almighty God who entered the U.S. with false documents and is detained in Detroit, Michigan. She is also threatened with deportation back to China, where she risks execution.