To avoid being monitored or arrested, preachers in Jiangxi lead members of their congregation to a distant meeting venue very early in the mornings. 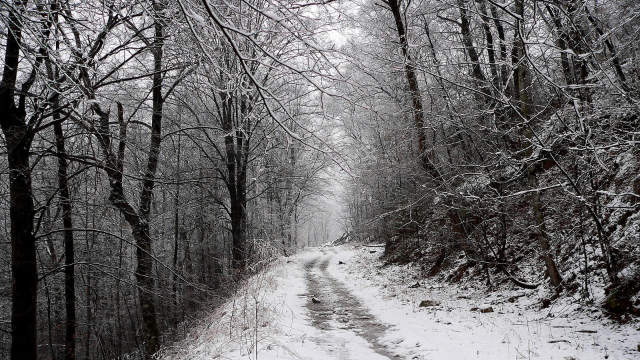 At four o’clock in the morning, the faint light from a flashlight flickered slightly in the bitterly cold wind. It is deep into the winter season and an elderly Christian named Qu Mei, pseudonym, along with a few of her elderly brothers and sisters from church are traversing the mountain road on their way to the meeting venue. The mountain road is less than one meter wide and is on a steep slope. The slope is covered with a thin layer of frost. To one side of the mountain road there is a steep precipice. Vehicles are unable to pass, so the Christians have no choice but to travel by foot.

“It isn’t slippery on this side. There is ice over there; it’s slippery,” the elderly Christian walking at the front and leading the way said as he carefully extended his foot to try the road ahead. Only after he confirmed that it wasn’t slippery do the others, who are following closely behind, continue walking forward one by one.

This is how a few elderly Christians from a house church in Jiangxi Province’s Jiujiang city got to worship service.

The meeting venue where Qu Mei and her fellow church-goers used to attend was shut down by the local government; the pastor in charge of the venue was intimidated and coerced by town government officials into signing a statement promising not to attend house church gatherings. Other preachers were similarly threatened and prohibited from preaching to believers anymore, or else face arrest, but instead, to avoid being monitored or arrested by the authorities, the preachers had no choice but to lead the several followers to a distant meeting venue very early in the mornings.

“I’m in my 60s. There are believers who are older than me, in their 70s or 80s. They’re rather aged and are more likely to slip and fall on this mountain road,” Qu Mei said. “Each time we meet, we have to leave at four o’clock in the morning and reach the meeting place before six. Government personnel start work at eight, so we need to wrap up our gathering before then. We only have this one time to meet every week, so we need to go no matter how difficult it is.”

As the early morning light breaks through the misty fog, about-two-inch-long icicles can be seen clinging to the branches of trees on the mountain. The icicles are just as tenacious as the faith of these believers, who refuse to retreat despite the persecution they are suffering.

“Keep your voice down when singing. If we continue like this, we will be discovered sooner or later,” said the preacher, surnamed Fang, who has been repeatedly threatened and summoned for talks by the authorities.

The room where the gathering is held doesn’t have a door and the glass on some of the windows is broken. As the believers sit together, they are so cold that their noses run. The gathering lasts for less than two hours. As eight o’clock approaches, the gathering ends and the elderly believers hurriedly disperse.

These few hours of hardship are only the tip of the iceberg of what Christians in China face every day under the rule of President Xi Jinping.