Land expropriations, demolitions of properties, and even deaths are the results of China’s nationwide rural rejuvenation campaign.

In March 2006, China’s National People’s Congress launched the “new socialist countryside” policy to help 800 million residents of rural areas catch up economically with people living in the cities through the reallocation of resources and readjustment of income. As part of the initiative, the Beautiful Countryside Project was started, aimed to promote villages with scenic landscapes and cultural specialties, as well as improve the ecological environment and economic development. Sixteen years ago, Xi Jinping vigorously promoted the project as the Party secretary of the eastern province of Zhejiang, and this became one of his “political achievements.” Soon afterward, the project was promoted and implemented on a nationwide scale.

However, under the current regime in China, no matter how good the plan to “benefit the people” is, it always goes sour during the implementation phase, and ordinary people become the victims of officials’ “political achievements.”

No negotiations, no compensation

In May, as part of the “beautiful countryside” campaign, the government of Baini town in Chongyang county in the central province of Hubei destroyed the buildings of 13 private enterprises, located along China’s National Highway 106. The affected merchants voiced their discontent but had no way to defend their rights.

On May 7, the manager of a brick factory received a government notice stating that the factory was going to be demolished. The next morning, the town’s mayor brought over 100 personnel to carry out the demolition. In an instant, the factory was reduced to a pile of rubble.

Before the demolition, the factory manager told government officials that the enterprise had a business license and had been in operation for over ten years, so the government should provide compensation. But the officials refuted his claim, saying, “Don’t even think about getting compensation. If we say it’s going to be demolished, then it’s going to be demolished. There is no room for argument!”

A seven-room makeshift factory building, owned by a 74-year-old man in the vicinity, was also destroyed. The demolition workers dragged the elderly man’s wife out of the building. Despite his repeated pleas, the officials didn’t leave them a single room to live in.

Buildings of at least 13 other factories were simultaneously demolished, including a marble factory, a carwash, and a colored tile factory. Some factories didn’t even have time to move out their equipment, and none of them received any compensation.

Why was the government so “swift and decisive” in carrying out these forced demolitions? According to local villagers, the reason for demolishing the buildings of rural private enterprises along China National Highway 106 was to prepare for an inspection by Zhao Leji – a member of the Politburo Standing Committee and secretary of the Central Commission for Discipline Inspection.

One of the workers hired by the government to demolish the factories admitted that the so-called “beautiful countryside” projects are to prepare for inspections by the central government leaders. “This is called ‘putting make-up powder on a beggar’ – it’s shiny on the surface, but there is no concern for the life and death of ordinary people!” the worker explained.

Projects “for the people” end in their deaths

In order to create a “beautiful countryside,” the authorities of Luanchuan township under the jurisdiction of Henan’s Luoyang city have decided to develop a street for tourists, featuring local cuisine, in Yangzikou village. Without notifying or negotiating with residents in the area, the local government confiscated the villagers’ arable land and destroyed their fruit trees.

Gao Xiaojiao, one of the villagers whose land was seized, went around appealing for justice, but was repeatedly rebuffed. In despair, on May 24, she committed suicide by jumping into a reservoir.

“Gao Xiaojiao’s family relied solely on planting trees to make a living. After they were destroyed, she had no means of earning a livelihood anymore. Before her death, she said that she couldn’t go on living if no one resolved the matter,” said a villager.

Facing the demolition of her house for the sake of “building a beautiful countryside,” a 97-year-old resident of Dongjiangzui village in Shuangpu town, under the jurisdiction of Hangzhou city in Zhejiang Province, committed suicide by drowning.

“The government only cares about forced demolitions, and doesn’t care if civilians live or die,” a villager said with anger. Other residents questioned why only the houses of ordinary civilians are destroyed, while the homes of officials remain unscathed.

An elderly man in Moling town under the jurisdiction of Xiangcheng city in Henan Province couldn’t stop crying telling the story of his demolished house, which he spent a lifetime and nearly one million RMB (about $ 140,000) to build. The four-story building too fell victim to the “beautiful countryside” project. As in other similar cases, the man didn’t receive any compensation.

In Moling town, all buildings and auxiliary structures to the west of China’s National Highway 106 were torn down under a made-up pretext to “maintain safety on the river.” Just like the elderly man’s house, over 300 residents and merchants in the town faced forced demolitions to give way for the construction of Changhong Canal. Among them, homes of more than 200 people were demolished on the grounds that they “violated building laws.” The government posted notices requiring that the buildings be destroyed by the specified date and threatened with criminal liability if anyone disobeyed. 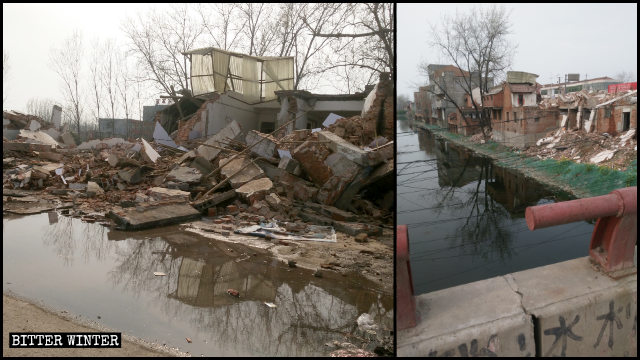 A person posted a complaint on the WeChat messaging platform: “In 1984, [our] houses were built through government planning, and house ownership certificates were issued to us. In 2001, they were demolished due to government planning. Afterward, the state wanted to develop roads and remediate all the rivers, and demanded to demolish them again. We complied with the government’s arrangements. Now, the government wants us to demolish them again. No compensation was paid! No notice was posted! No agreements were signed! What kind of behavior is that? Is the law child’s play?”

Villagers tried appealing to the municipal Party secretary, but the reply they received was: “The previous policy was the previous one; the current one is the current one. The existing policy is being implemented now.”

“Isn’t this a rogue government?” villagers were angry at the authorities defaulting on its promises for the sake of implementing their plans. “As long as the government wants to tear something down, it will always have a thousand reasons for doing so. Ordinary people will always be like fish on a chopping block.”