Allowing the Chinese to worship only the Communist Party, authorities are ordering the removal of the fundamental law of Christianity from churches. 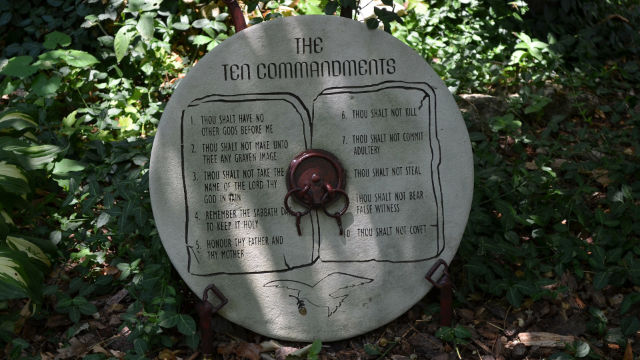 Bitter Winter’s report about the removal of the first of the Ten Commandments from a church in Luoyang city, in the central province of Henan, received widespread attention in many media outlets. As per some government insiders, the unwanted interest has pushed local officials to consider reversing the decision to cover up this act of religious persecution.

In reality, however, the Ten Commandments continue to be the eyesore for the authorities that do anything they can to make the whole population of China believe in the only God – the CCP. And the biggest stumbling block on this path, the government asserts, is the commandment “You shall have no other gods before Me.” As U.S. Secretary of State Mike Pompeo said while presenting the State Department’s International Religious Freedom Report for 2018, “The Chinese Communist Party has exhibited extreme hostility to all religious faiths since its founding. The party demands that it alone be called God.”

Christians from a county under the jurisdiction of Luoyang told Bitter Winter that in May, the local Religious Affairs Bureau organized a meeting for the county’s Two Chinese Christian Councils and the persons in charge of churches, demanding to remove any materials with Ten Commandments in the government-approved churches and replace them with other texts.

The authorities have been pushing the demand since Christmas last year, according to a co-worker from a Three-Self church in the county. “First, they told us to take down the first Commandment. Then, they told us to replace the sign with all the Ten Commandments,” said the co-worker.

Officials from the Religious Affairs Bureau said that the Ten Commandments in many churches elsewhere have already been replaced with portraits of Mao Zedong and Xi Jinping, claiming that the policy comes from higher authorities. The officials threatened that “things will be tough” for those who don’t cooperate,

When asked why the Ten Commandments had to be replaced, the officials explained that it was because “Christianity claims that no other gods should be worshiped.” Meaning, that the only deities that should be worshiped are the CCP and its leaders.

Another Three-Self Church co-worker said that he had seen a government document that demands the removal of the first Commandment, but he was unable to provide Bitter Winter with any additional evidence.

A Three-Self church in Xingyang, a county-level city under the administration of Henan’s Zhengzhou city, wasn’t so lucky. On January 4, local officials broke into the church, tore down its signboard and a poster with the Ten Commandments inside the church. Some elderly believers were injured when trying to obstruct the removal; three had to be sent to the hospital.

Some congregation members recounted to Bitter Winter that the government personnel at the scene were shouting that the Ten Commandments had to be torn down because they say that only one God should be worshiped.

The same month, officials from the government of Yanshi, a county-level city administered by Luoyang city, broke into a Three-Self church and tore down a sign with the Ten Commandments. According to a local government employee, the Religious Affairs Bureau issued a notice, requiring clergy members to remove the first four of the Ten Commandments in their churches.

“The Ten Commandments are the Christian doctrine and teachings. The first four commandments concern the worshiping of God. Deleting these is offensive to God. Why not change the CCP’s manifesto and Party platform?” a churchgoer said indignantly.

According to local Christians, a nearby Three-Self church was forcibly closed down because it refused to tear down the Ten Commandments and a religious banner.