Source: Alliance of Conservative and Reformists in Europe
Date: June 30, 2018

Members of the European Parliament, NGOs, and international institutions expressed great interest for the first Faith and Freedom Summit organized by the Alliance of Conservative and Reformists in Europe, the third largest European political group, at the Solvay Library in Brussels on June 28. A fully packed room welcomed European MPs, international religious liberty advocates and experts, and high-profile U.S. and Canadian delegations.

Rosita Šorytė, associate editor of Bitter Winter, spoke on the situation of religion-based asylum seekers in Europe, with particular reference to the members of The Church of Almighty God, a Christian new religious movement severely persecuted in China. The general theme of the Summit was “practicing what we preach.” Europe advocates religious liberty internationally, but does not always guarantee full religious liberty within its borders. Šorytė, who also serves as president of ORLIR, the International Observatory of Religious Liberty of Refugees, mentioned the reluctance of several European states in granting protection as refugees to members of The Church of Almighty God, based on incomplete information about this Church and what Šorytė characterized as an incorrect interpretation of international conventions. She also noted that, thanks to the efforts of human right activists, scholars, and lawyers the situation is improving, as evidenced by recent decisions in Italy and elsewhere. 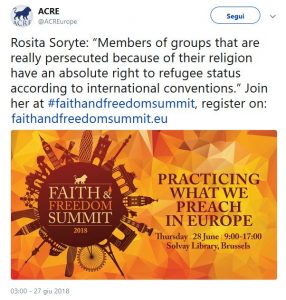