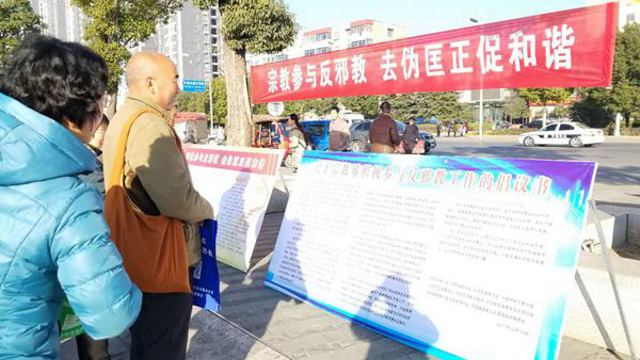 Officials are implementing a variety of new anti-religious activities, including the repurposing of religious venues, mobilizing relatives to “transform” believers, as well as extensive anti-religious propaganda campaigns.

Bitter Winter recently reported that authorities in Henan were repurposing religious venues for entertainment centers. The provincial Chinese Communist Party document entitled Compilation of Special Operation Exemplary Cases, which was adopted at the end of July, exposes the variety of other new measures that are being implemented in Henan to crack down on Christianity. Among them are mentioned such activities as the organizing of cultural events outside religious venues, setting up of letterboxes and hotlines intended for reporting “illegal religious activities,” and influencing the relatives of religious people to “transform” them.

Authorities across Henan have already forcibly taken over some religious meeting places and installed there the equipment for the games of chess or mahjongg, ping-pong tables, or video projectors. Religious gathering places are being converted into cultural activity centers, night schools for Party members, or even restaurants.

In Henan’s Hua county, the local authorities have started organizing “alternative” events close to Christian places of worship. Targeting especially rural middle-aged and elderly population, the authorities are inviting traditional opera troupes to perform outside these venues during regular congregation gatherings or special religious celebrations. As stated in the document, alternative activities outside religious venues are intended to “make people whose faith is wavering no longer have faith and compress the space for religious belief.”

Additionally, the authorities have also established a “night school for peasants” with classes once or twice a week explaining the new Regulations on Religious Affairs.

The document also orders town and village cadres to involve the relatives of believers to persuade them breaking up with religion and no longer attending meetings or events. As per the document, “family members should be the first ones to conduct ideological work on missionaries.” The pressure from families is seen by the Chinese Communist Party as a measure with long-term effects, penetrating every facet of a believer’s life.

The authorities pay particular attention to the anti-religious propaganda. For example, Fangcheng county government reported that it “dispatched 20 propaganda vehicles, created 172 propaganda posters that were displayed in 666 locations along with various banners and slogans, and distributed 23,000 copies of anti-religious brochures.” Besides, the authorities organized 118 training sessions on the topic for 20,000 government personnel and teaching staff.

Meanwhile, Hua county has introduced educational content aimed at “preventing religious infiltration” to the curricula of primary and secondary schools and issued a letter to parents demanding that students do not enter religious venues or participate in religious activities.